**This giveaway is closed. Winners announced at the end of this post.**

As promised, I’m going to share my living room “phase 1” progress with you today.  (If you missed it, you can see the entire plan here and here.)  At this point, I think phase 1 is about 20% complete.  But what a difference 20% makes!  If you’ll remember, here’s how the room looked at 10:00pm last Tuesday night… 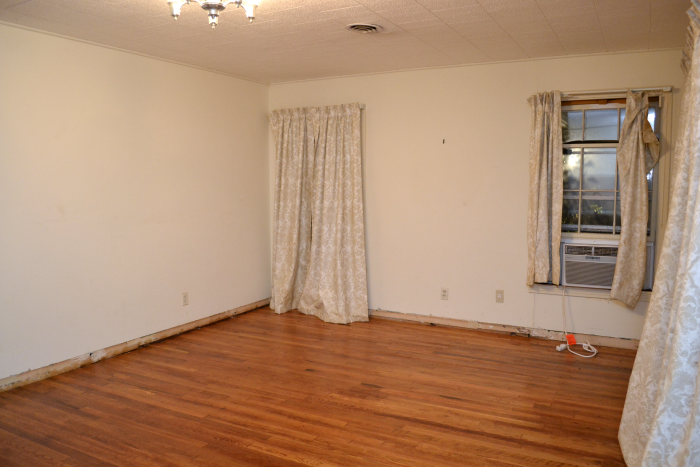 And here’s how it looks now. 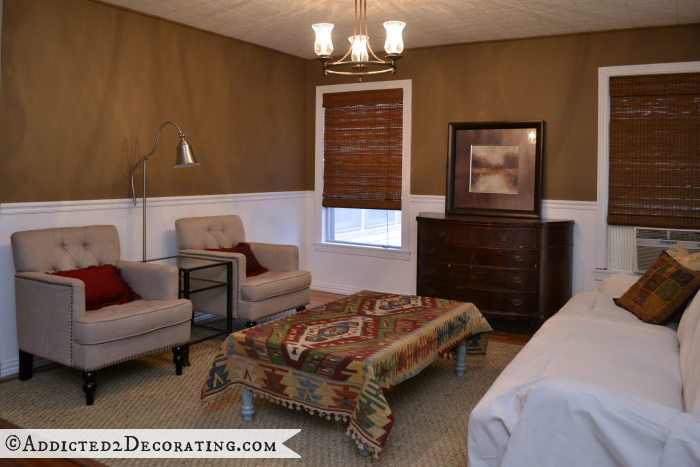 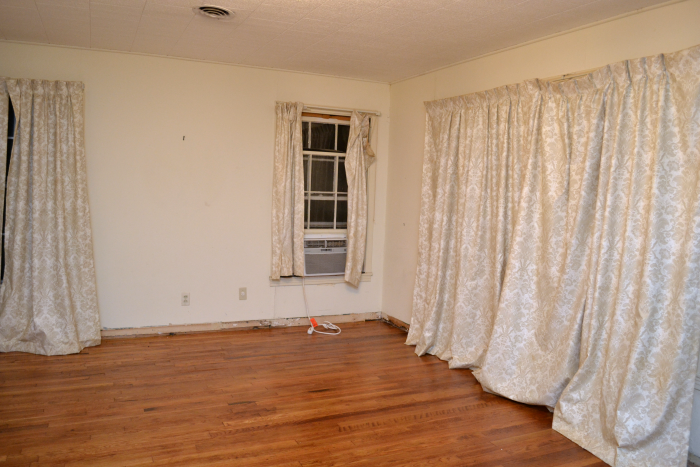 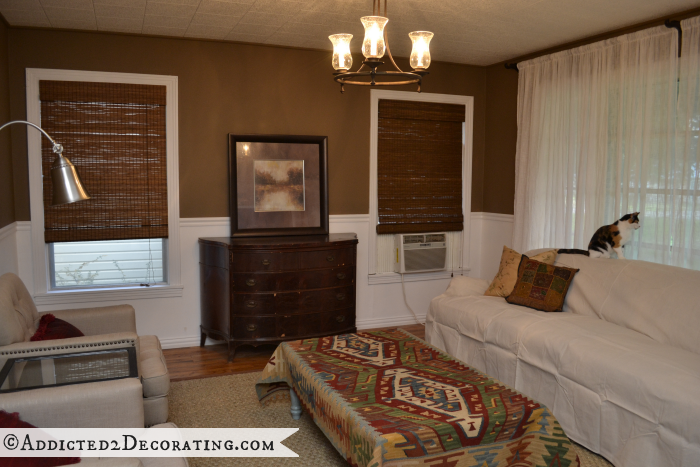 I ended up going quite a bit lighter on the wall color than I had originally planned (believe it or not!).  I ended up using a Behr color called Sweet Georgia Brown, which is the same color I used in Gwen’s bedroom three or so years ago.  The white that I used is called Polar Bear, and it’s the same white I used on all of the trim, doors, and wainscoting in the condo.

This room is definitely very “thrown together” at this point.  It’s a far cry from what it’ll be when Phase 1 is complete, and so far the only things giving this room any sort of “put together” look are my awesome Overstock.com items.  But it’s definitely a step in the right direction.

My crazy floral sofa (that I’ll be reupholstering in the near future in a solid fabric) has just been covered up with a canvas drop cloth, which I didn’t even bother to iron.  (I mean, seriously…I can barely manage to iron my clothes when needed.  I’m certainly not going to waste time ironing a canvas drop cloth that is hopefully a very temporary solution to a floral eyesore.) 😀

The coffee table is the one I made here, but it looked way too country farmhouse sitting next to my antique dresser, so I covered it with my Turkish kilim.  Neither of those items will be in the final Phase 1 room. (I finally decided to use the kilim to upholster an ottoman for another room, but more on that later.)

The framed painting is one that I found in one of my storage units.  I have two of them, and they’ve just been sitting in storage for years.  It won’t be in the final room either (which is why it’s just sitting and not hung on the wall), so for now, it’s just filling space.  Same goes for all of the pillows in the room right now.  Just temporary.  Just filling space and adding color (the wrong colors, but that’s okay for now). 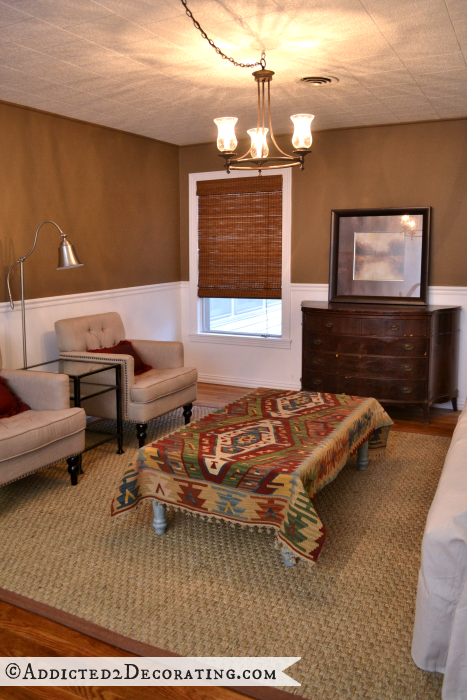 I replaced the original chrome light with a new oil-rubbed bronze fixture.  For now, it has to be swagged.  It’s not my favorite look, but I won’t be removing polystyrene ceiling tiles or doing electrical stuff right now.  That day will come…eventually.  For now, I have to live with less-than-desirable things like swagged lighting, polystyrene ceiling tiles, an eyesore of a window air conditioning unit, and trim with layers and layers of thick, dripping paint.  That’s all part of the fun of living in a house built in 1948, right?  🙂  We’ll just call it “charm.” 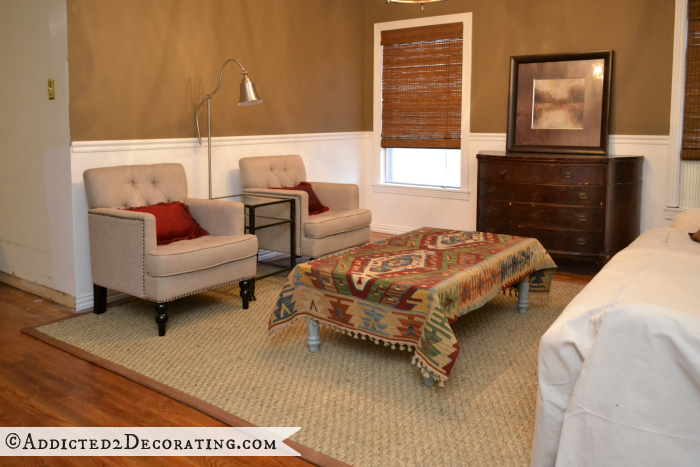 If I center the rug and the furniture on this wall with the big window on the opposite wall, it sticks out past the wall.  Uggghhh!!!  That is the visual version of fingernails on a chalkboard to me.  (Obviously I haven’t painted or trimmed out that wall.  Ha!)

Eventually that wall will be moved over about three feet to enlarge the kitchen, which will also square up the living room so that things on this wall are more in line with the big window.  But that’s part of the final plan.  Phase 1 definitely doesn’t include moving walls, so for now, I’m stuck with this.  I know, I know.  In the whole scheme of things, this is a ridiculous thing to be complaining about, right?  🙂

And finally, I have my drapery rod hung, ready and waiting for some gorgeous draperies.  (I got an email saying that my fabric is on backorder.  Boo!) 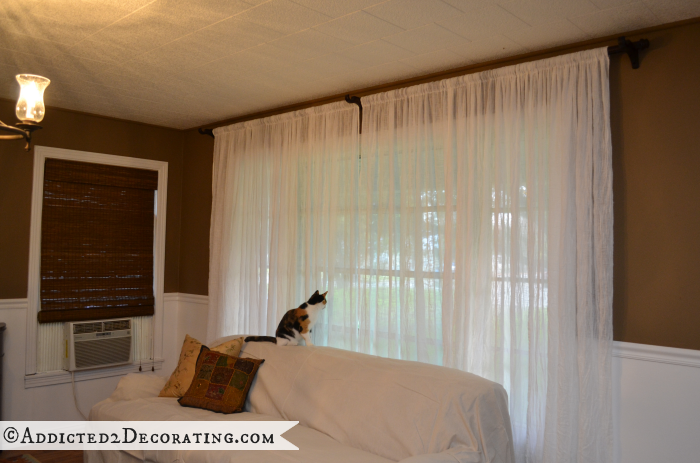 I bought a double rod because I’ll be using draperies as well as sheers.  These particular sheers are some that I borrowed from the condo (they actually belong in the bedroom there), and the sheers that I’ll be using on this window will be on rings because I want them to be functional.  But for now, this will do.  I just needed something to cover the bare window until I can get my draperies made and sheers selected and ordered.

So that’s it for now.  Obviously I have a long way to go still, but I think I’m off to a pretty good start.

It probably goes without saying that my favorite things in this room right now are my Overstock.com items — the tufted chairs, the metal and glass table between the chairs, and the seagrass rug.

I actually have two of the black iron and glass end tables, and I’ll be using both of them in the final room.  But for now, using both of them makes the furniture stick out way past the wall.  I’m trying to deal with the rug sticking out past the wall, but having the actual furniture stick out like that just might send me over the edge.  😀  So for now, I’ll just be using the one end table.

And now the fun part…a giveaway!

I’m so excited because I get to give two of you a $100 gift card to Overstock.com!!  I have so much fun looking through their site, picking out things for my living room, and they have so much stuff that I have no doubt each and every one of you could find something just right for your home.

Here are the details:

*Disclosure:  I was provided with a $1000 gift card to Overstock.com to decorate one room in my house.  All opinions expressed are my own.

Congrats to the giveaway winners! 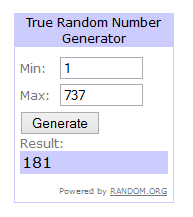 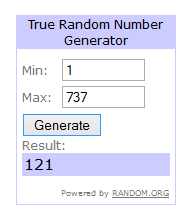 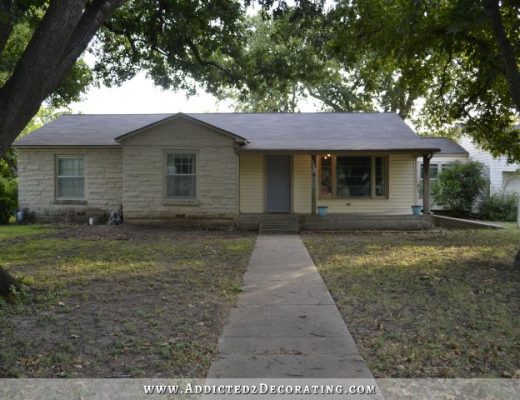 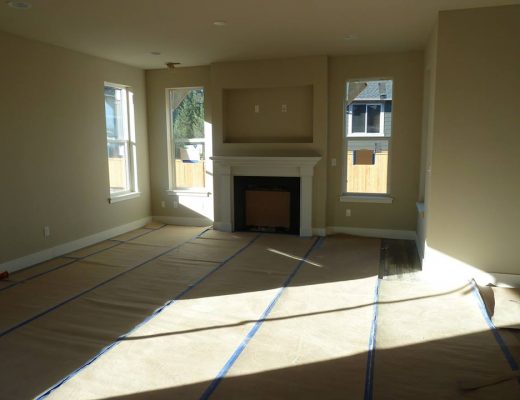 Q & A – How Should Andrea Dress Her Corner Windows?