Y’all, I am so excited because the solution to my bathroom trim issues came to me yesterday (and honestly, was probably inspired by one of your comments), and I have been chomping at the bit to get in there and see if this idea will work since yesterday morning. I spend Wednesday afternoons at my mom’s house, and then Wednesday evenings at my church small group, so I woke up this morning excited to get through my morning routine and lunch so that I can get to work. In fact, I had planned on tackling a reader decorating question in today’s post, but I’m way too excited, and my mind is way too distracted, for me to give that the thought and attention it deserves.

Unfortunately, I may not get very far on implementing this idea today because I still need to take down all of the boards and spacers that I had already installed, and there will probably be some ceiling drywall repair needed since I used construction adhesive to attach those spacers.

So that will probably be a whole day’s work removing that trim and repairing the ceiling. But at least now I feel incredibly motivated to do it because I have a solution to my trim issues!

So first, let me back up a bit and explain the issues. My plan from the beginning was to install crown molding continuously around every part of this bathroom, including the toilet area and the shower. I had to come up with a way to make the crown molding continuous and smooth as it transitioned from the main part of the bathroom into the shower, which was a challenge since there’s this 1″ x 5″ board delineating the main part of the bathroom from the shower.

I also had to figure out how to deal with the fact that on the shower side of that transition board, there’s tile on the wall that sticks out 1/4-inch.

So my plan from the beginning was to install a 1″ x 4″ (or a 1″ x 3″) board all along the top of the walls to make it flush with that transition board. I had planned to deal with the 1/4-inch difference in the tile by using my table saw to cut a rabbet into the back of the 1″ x 4″ board so that the top of the board would rest against the wall, and the rabbet on the bottom would accommodate the 1/4-inch projection of the tile (think of how a rabbet is cut into a picture frame so that the glass can be recessed into the frame). Once those 1″ x 4″ boards were installed, then I’d just install crown molding on top of that, continuously around the entire room.

That plan was all good and well except for this pretty significant dip in the ceiling in the shower.

My contractor didn’t notice that, and his guys didn’t notice that. And I can’t get upset with them about that because I didn’t notice it either (me, Ms. Eye-For-Detail, Ms. Perfectionist). I didn’t notice it at all until my work on the shower (i.e., the tiling) was almost completely finished, and there’s no way I’m having things torn up at this point to fix it. If it were on a wall that’s a focal wall from the main area of the bathroom, then maybe I’d have it fixed. but it’s on a wall that’s only visible when you’re standing inside the shower, and I’m just not going to worry about it.

But it does affect crown molding. And that discrepancy is way too much to just scribe and cut the top of the crown molding to fit (that would make it more obvious). And that’s when I came up with the idea of doing a drop down around the perimeter of the room, and then installing crown molding. But that made the crown molding way too close to the top trim on the doors in the bathroom.

So that’s where this has stood, and I’ve been racking my brain trying to come up with a solution. The obvious easy answer to the shower was just to tile all the way up to the ceiling. Bright white tile meeting a bright white ceiling makes that ceiling issue disappear.

But then that left me with the issue of how to end the crown molding at the entrance to the shower without having to use a hanging return, which I do not like, and just refuse to use in this bathroom.

And that’s where my brain has been stuck for a very long time now, and I couldn’t seem to see past my trim problems at all.

Yesterday morning, I finally put some concerted effort into coming up with a solution. I realized that I needed to find a solution that (1) finished off the tops of the vertical boards on either side of the shower entrance (as well as the entrance to the toilet area, since they need to be symmetrical) so I don’t just have boards dead ending into the ceiling, and (2) that provides some depth so that the crown molding in the room can dead end into the side of whatever I use to finish off the tops of those transition boards. That way, no hanging return is needed. All I’d need is a straight cut on the crown molding that dead ends into whatever is at the top of those transition boards.

So I started looking for ways that people dead end crown molding, and I found two different solutions that could work for me.

First, I came across these mid-molding blocks from Lowe’s.

I can’t find the size that I need anywhere, and the ones I did find (like the one above) look awfully fancy for my house.

So basically, I’d make four of those to go on either side of the entrance to the shower and the toilet area. They’d be installed at the top of those 1″ x 5″ transition boards like this…

And then all of the crown molding can just dead end into those top blocks.

So that’s one solution that I found, and I think it could work and look really pretty and intentional. That’s the key. I want whatever I use to look intentional, and not like an afterthought. Having a 1″ x 5″ board dead end into the ceiling with a hanging return on the crown molding just before that board would look unfinished and like poor planning, and I want to avoid that at all costs.

The second idea came from this style of mid-molding block, also from Lowe’s.

I actually like this idea much more because it looks like a pretty corbel. But there’s no way my perfection-seeking brain would let me use something like that if it doesn’t perfectly match the profile of the crown molding in the room.

So that got me to thinking about how I could make something like that. It would basically be a corbel that is 4.5 inches wide, and that has the same exact curve profile as my crown molding, but is larger than the crown molding so that the crown molding can dead end into the side of that corbel.

So basically, I would want to take the profile of my crown molding, enlarge it about 125% or 150%, and then turn that design into a corbel that could be attached at the tops of those vertical transition boards.

But this solution is a lot harder and would require more work. The easiest way to go about this would be to start with a block of wood (probably by gluing 1″ lumber together until I get the right thickness), and once it’s dry, using a band saw to cut out the design. But that’s the problem. I can’t find a band saw that can cut a 5 inch thickness.

I could cut the design out of 1″ lumber using my jigsaw and a detail curve blade, cutting each piece separately ((which would take six individual pieces per corbel, and I’d need four corels) and then after they’re cut out, glue them together to form a corbel that’s 4.5 inches wide. But cutting them out separately would require a whole lot of detail finishing after they’re all glued together. But I might try it anyway just because I really like the corbel idea more than I like the other design with the square block at the top and the pointy crown molding detail below.

I might make both of them and then compare and see which one I like better. But I’m pretty sure that one of those ideas will be a winner, and that will allow me to get moving on this trim, and then move on to other projects in the room. 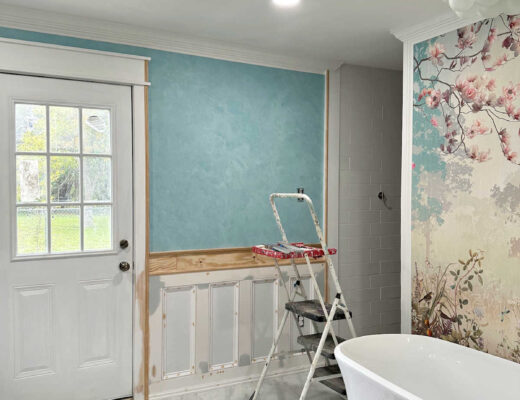 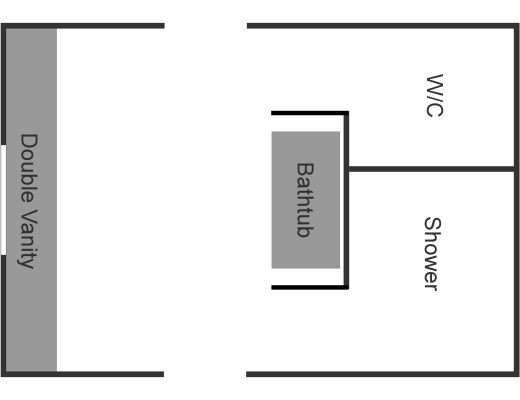 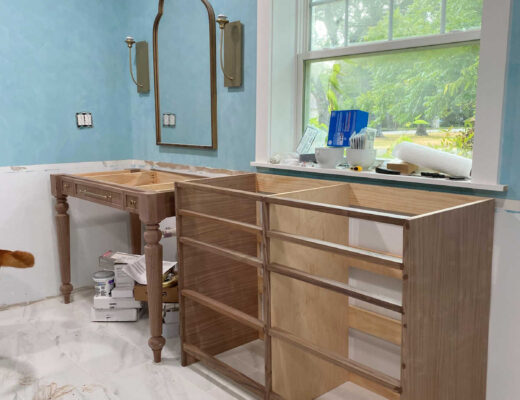