I think the majority of you agreed that since my little spinet piano isn’t some free castoff from Craigslist, but is actually a family piece with sentimental value, I should take my time stripping and refinishing it rather than slapping a couple of coats of paint on it just so I can cross it off of my to-do list. (Although the suggestion to paint it black was actually a very close second.)

So I spent yesterday in my studio (which I can currently use as a workshop since it’s so unfinished) stripping and sanding all of the removable pieces. 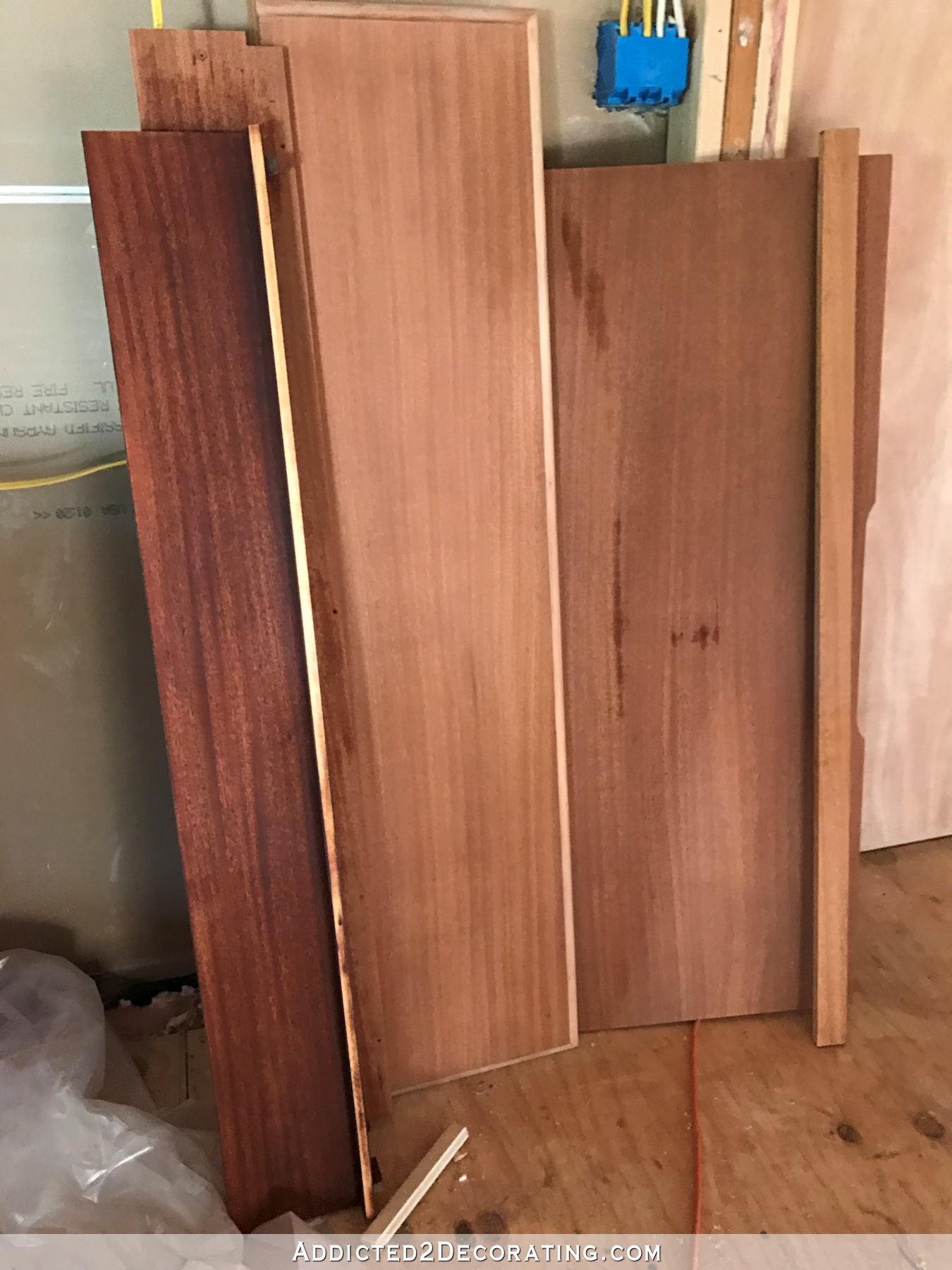 I started by using a chemical stripper, scraping off the thick finish, and wiping it down with the After Wash. (More on that process here.) Then I used my sander with 150-grit sanding discs to remove the rest of the finish. As I finished stripping and sanding each piece, I wiped it down with mineral spirits to clean off the dust. The pieces you see above are at various stages of drying after being wiped down with mineral spirits.

The reason I started with a chemical stripper rather than just sanding is because on pieces this old, the top layer of lacquer is generally so thick that it takes a while to get through it with a sander, and it’s hard to sand it off evenly. So while one area under the sanding disc may still be trying to cut through the thick lacquer, another area may be through the lacquer and working on eating right through the veneer layer. I find that I’m less likely to accidentally sand through the veneer layer if I take the time to use a chemical stripper first to get through that thick layer of lacquer.

So here are the pieces that I stripped and sanded. I was pleasantly surprised at how nice they all looked. It’s not assembled yet since I still have to do something with the case, so these pieces are just sitting in place still disassembled. 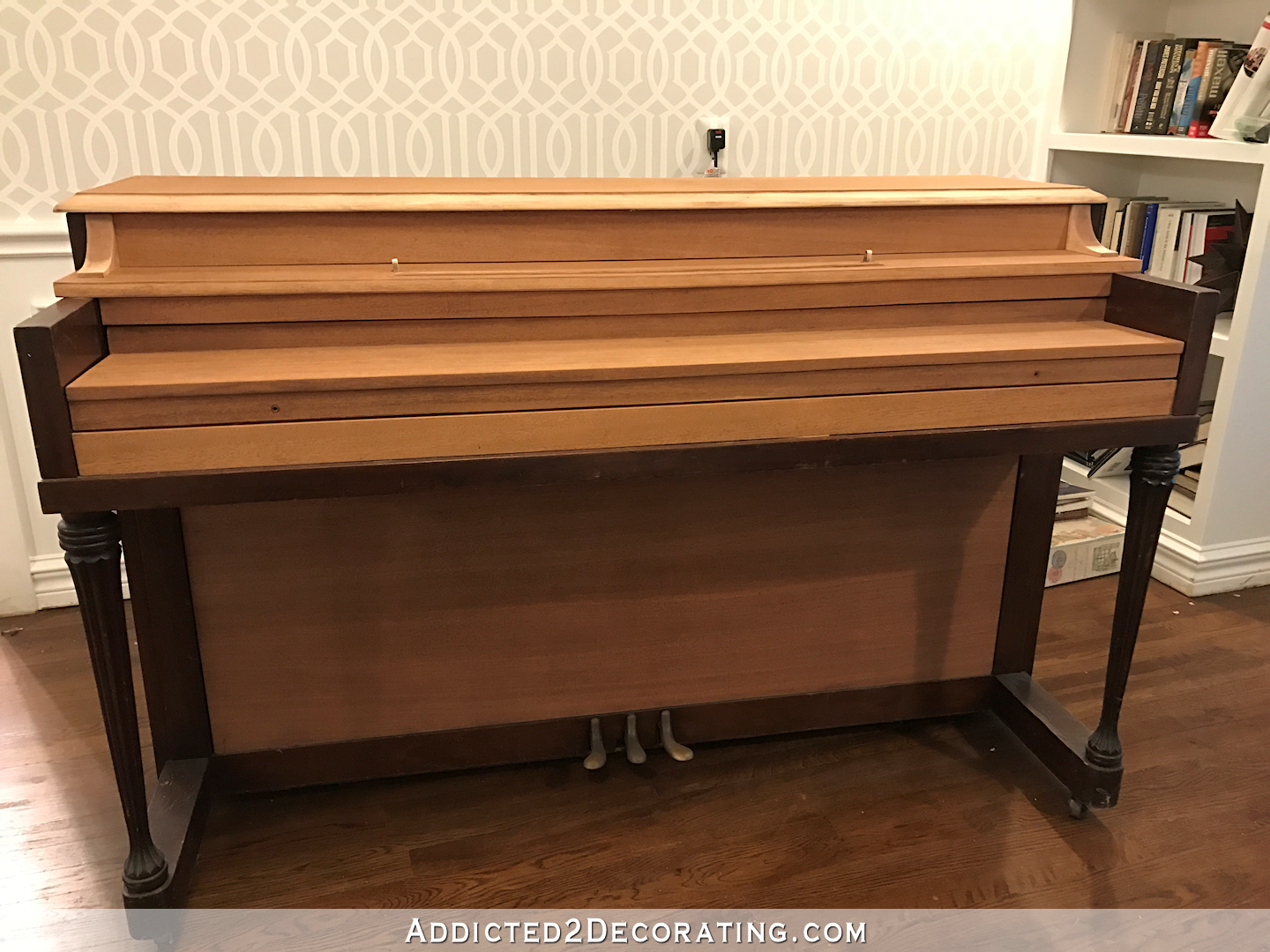 The only off-color wood is on the edge of the lid, and then on the two little brackets just under the lid. Everything else is covered in the same veneer. But wow, is it orange! 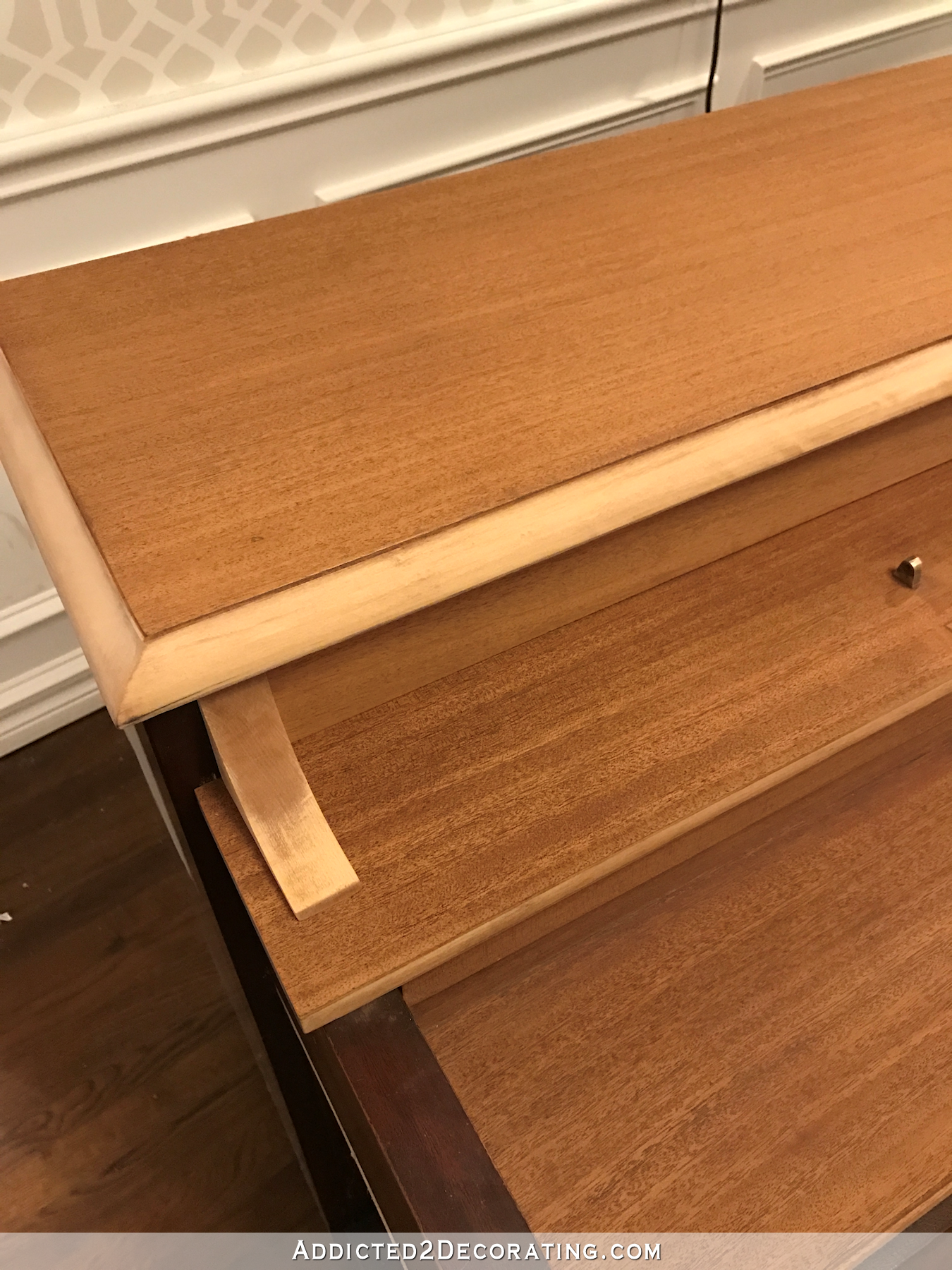 But the veneer itself is very pretty. I love the subtle grain in it. I have no idea what kind of wood this is, so let me know if you recognize it. 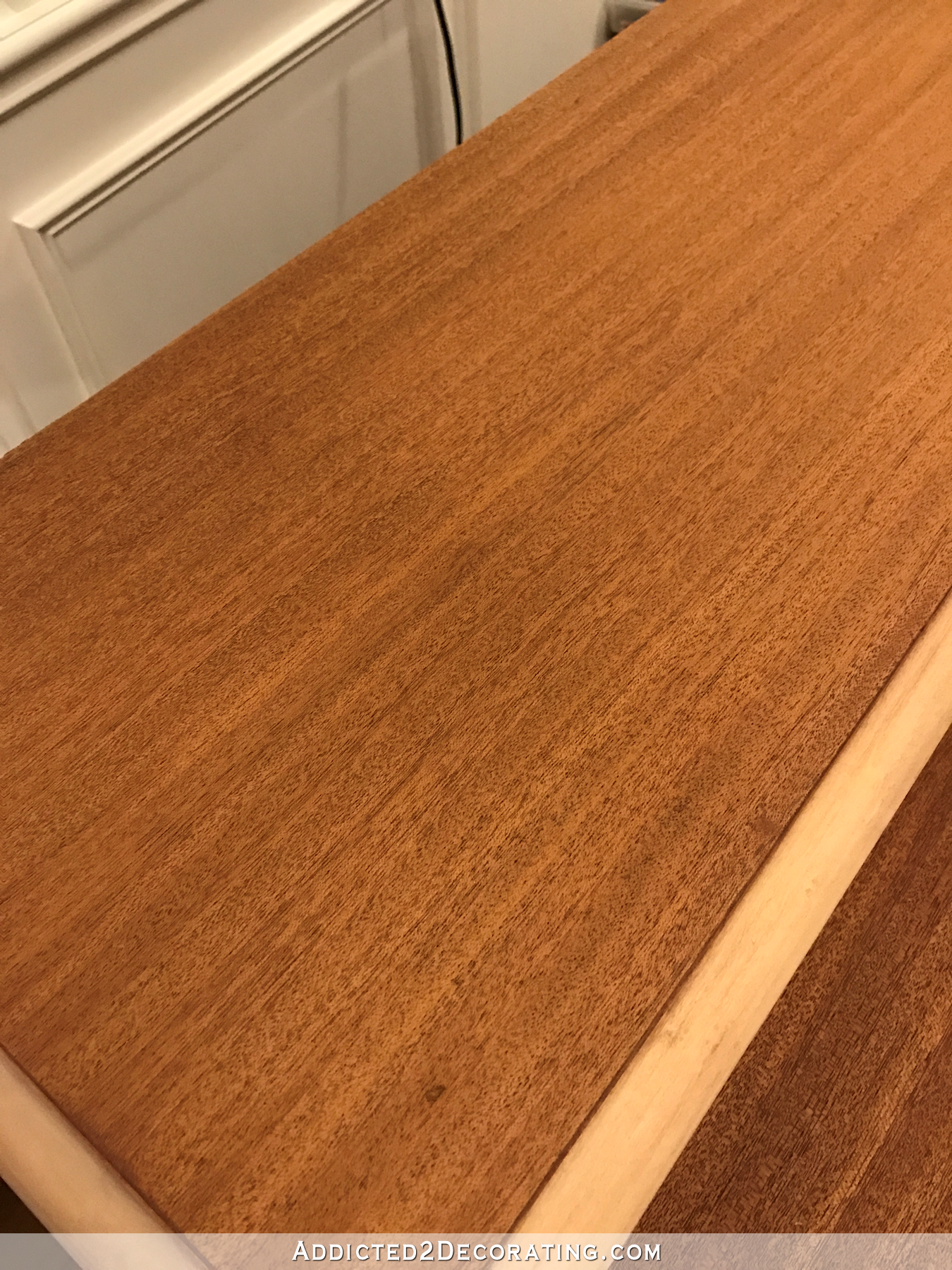 So all of the removable pieces are stripped, and now I’ll move on to the case. 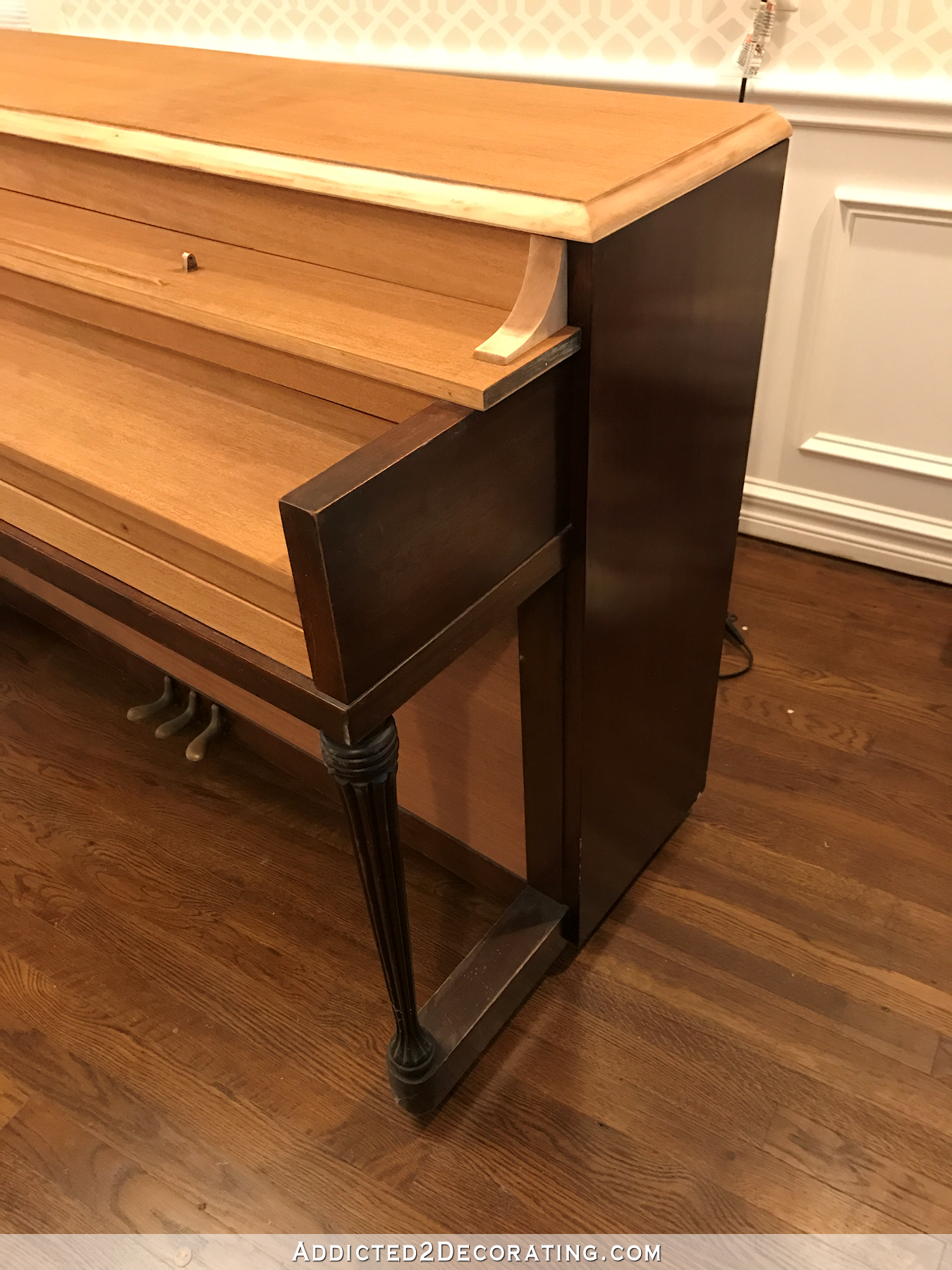 I honestly don’t know if I have it in me to strip the case. It would have to be done in place, sitting right there in the music room, and even if I cover the entire floor with drop cloths, I’m so afraid that I’ll accidentally track some stripper onto the hardwood floors. Plus sanding inside is such a mess. 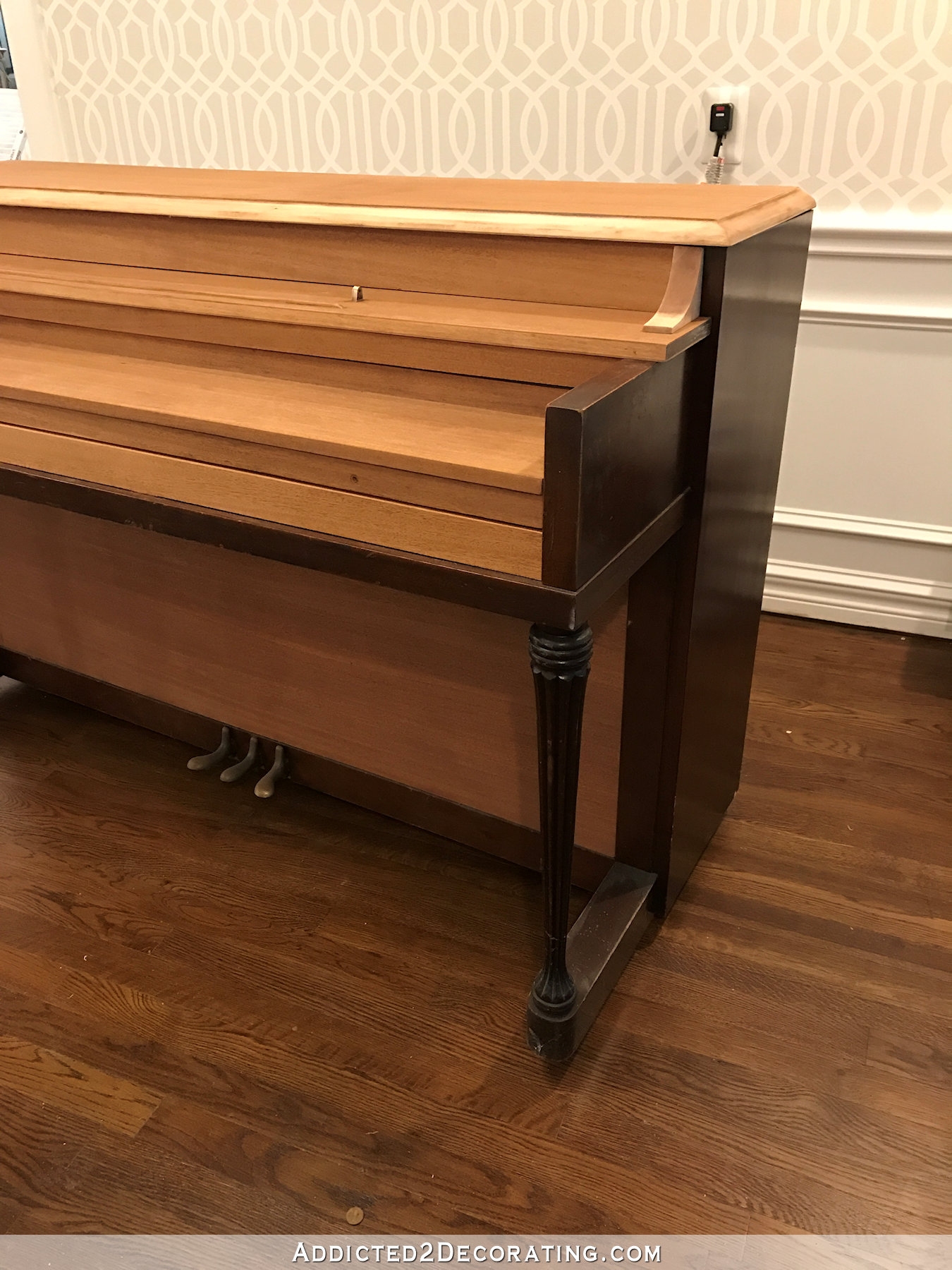 Every time I look for examples of that online (i.e., stained removable pieces, painted case), I stop dead in my tracks when I see this gorgeous Kimball console piano. 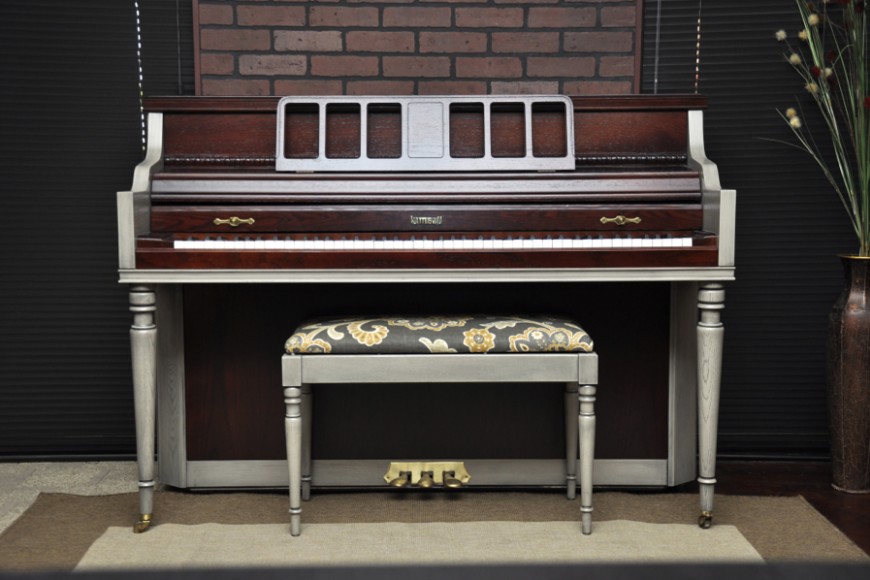 I love the two-tone look, and I think that piano is so classy and beautiful. My mom loves it, too.

But does it remind you of anything? 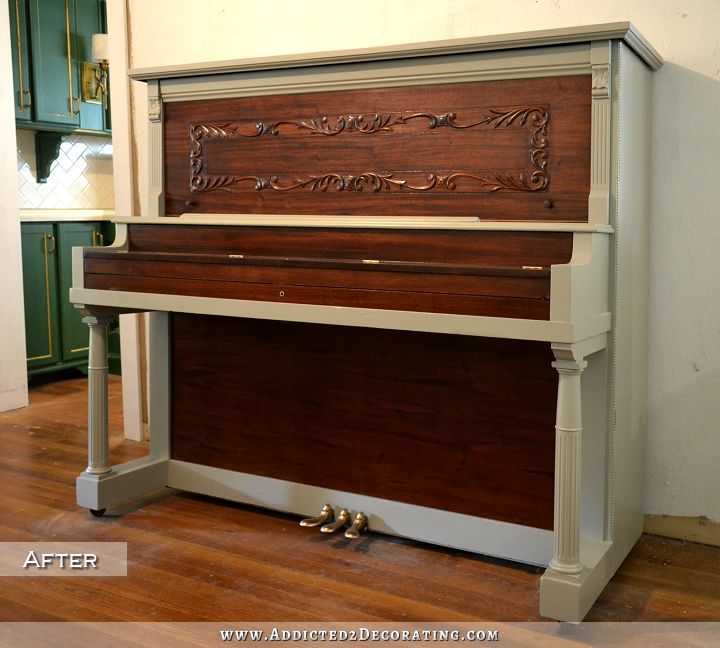 I’m pretty sure that same Kimball piano served as the inspiration for my first refinishing attempt on the big upright piano. Obviously there are some pretty significant differences. First of all, those two pianos are totally different styles. I think that beautiful Kimball console is a little closer in style to my current spinet than it is to my first huge upright piano. Second, the stain color I used isn’t as dark and rich as the color used on the Kimball. And third, the gray on the Kimball is totally different (it’s actually stain and not paint) and looks like it has some sort of dark wax over top to bring out the details in the turned legs.

I love everything about that Kimball, but my big upright just missed the mark for me. Plus, I tried to make it go in a house with a green kitchen and lots of bright, bold (warm) colors. That didn’t work either. But I think something closer to the Kimball would work beautifully with my blues and teals.

I’ll have to really give some thought to the type and color of stain I want to use. When I originally planned to refinish the piano, I thought perhaps I could just strip it and then polyurethane the whole piano for a more natural color. But if I use a water-based poly, it’ll be that light orange color, which is just not pretty to me. And if I use an oil-based poly, it’ll turn really red, and I don’t want that either… 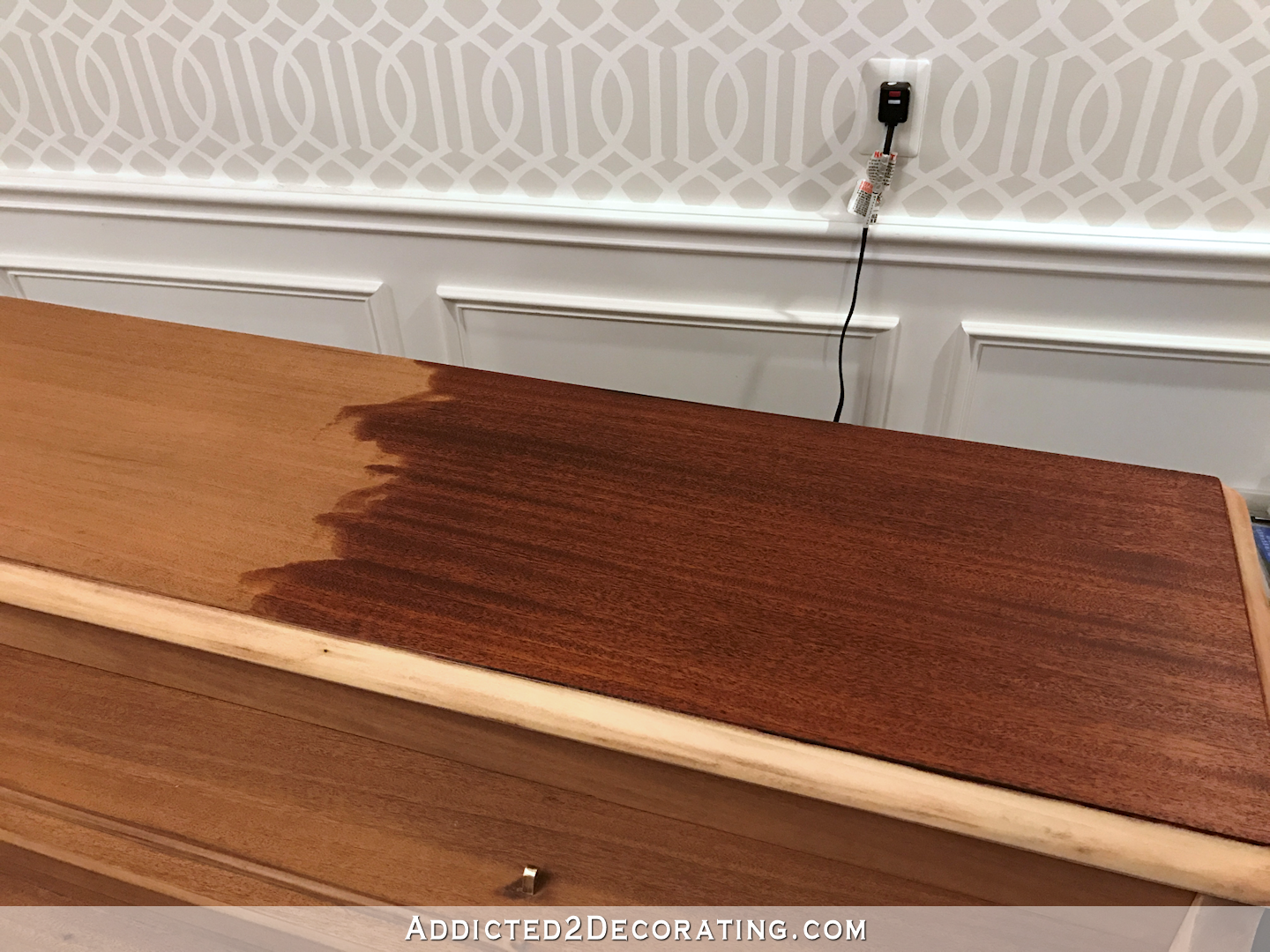 To test that out, I just wiped some mineral spirits over the top  of the veneer. That will generally give you an idea of what the wood will look like with oil-based polyurethane on it. It takes about an hour to thoroughly dry and go back to the natural color.

So I think I’m going to try out the gray + stain look again, but this time I’m going to keep a picture of that Kimball right next to me the whole time so I don’t lose focus and choose some off-color stain or another ugly gray. And of course, if I end up not liking the case painted gray, I can just strip it and stain it to match the rest. At least half of the piano will already be stripped and stained. 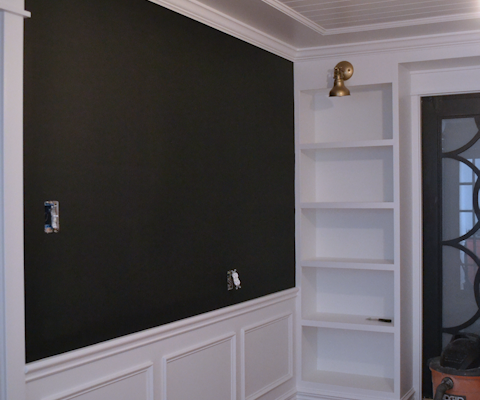 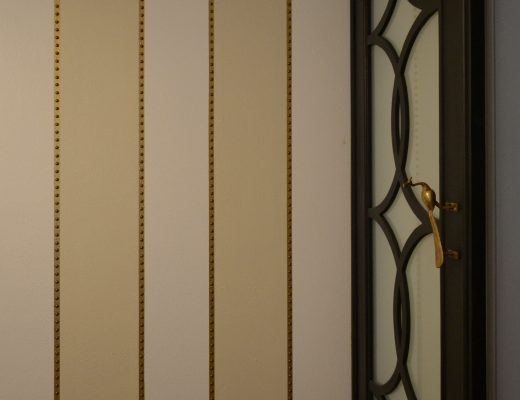 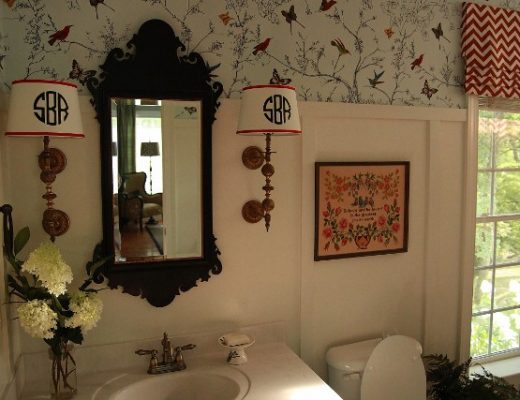 Music Room Walls: To Wainscot Or Not?