My Selections For The Hallway Bathroom Finishes

After reading all of your comments and suggestions about the hallway bathroom, Matt and I had a heart to heart talk about our plans for our house.  Long story short, we decided to just leave the hallway bathroom footprint just as it is…for good.  That means that there will be no major hallway bathroom remodel in my future.  What I do now will be what I’ll live with for many years to come.

My thinking in wanting to remodel in the future was that when we start our big remodel (master bathroom, master bedroom, laundry room, and family room), the hallway bathroom will be the only bathroom in our house for a while.  So I really wanted to remodel it first (immediately before we’re ready to start the big remodel) so that our only bathroom would be fully accessible to both of us while the entire back of the house is under construction.

I have no idea how long that remodel is going to take, but my mom’s bathroom remodel, done completely by pros (i.e., not a DIY project) took three months.  I’ve had clients in the past whose kitchen remodels took up to four months.  So a whole addition with four rooms (one of which will be a bathroom) and hallway could take way longer than that, especially factoring in that I will definitely want to DIY a lot of it rather than paying contractors to do work I can (and want to) do myself.  So all of that to say that I really wanted a hallway bathroom that was completely accessible for Matt during that time.

But the fact is that ever since Matt has been in a wheelchair, we’ve never had a bathroom that’s completely accessible to him.  So as we were talking about it, he basically said, “I’ve gone this long, so once the remodel starts, what’s another seven or eight or nine months?”  We both finally decided that it makes more sense to put that money towards creating an amazing and fully accessible master bathroom, even if it means that he has to wait a bit longer to have a bathroom that’s completely accessible to him.

Phew!  That as the long way of explaining that the hallway bathroom is staying just like it is as far as layout. 🙂

So as I’ve been selecting finishes for the room, I’ve done so knowing that I’ll be living with these for a very long time.  Here’s what I have so far… 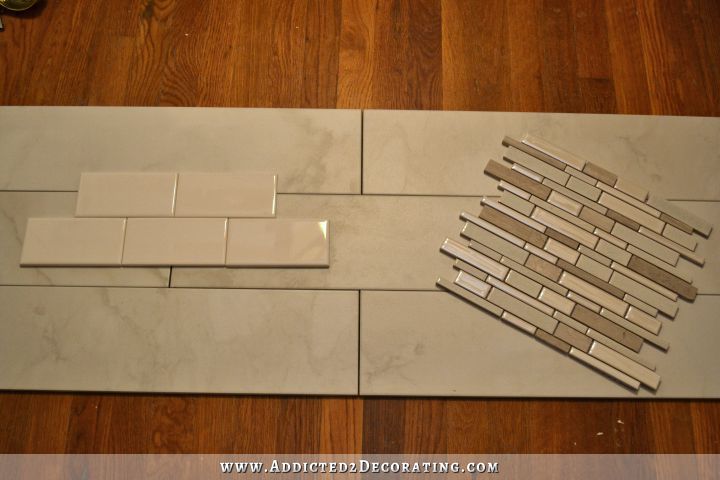 I just love the subtle marbled look of the floor tile.  And most importantly, I love this it’s a warm taupe/tan color rather than gray.  I’m just not a fan of gray, and it’s hard to find a light/white marble (real or simulated) that isn’t gray. 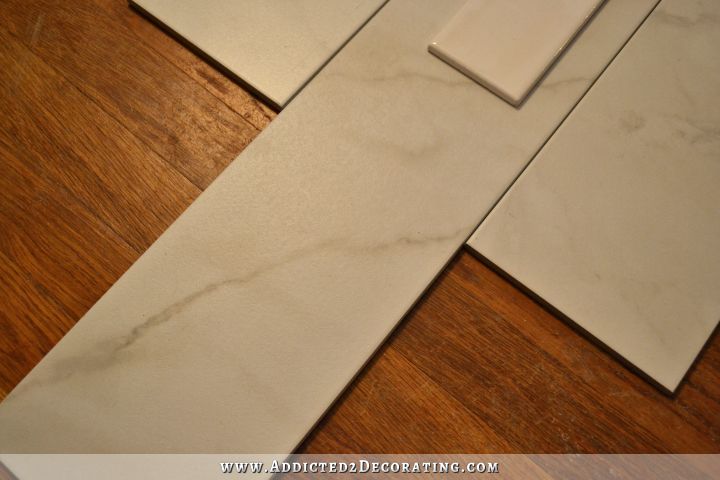 But this mosaic tile is my favorite!  I searched high and low for a mosaic tile that had the taupes and browns in it, but also had white to tie into the subway tile. 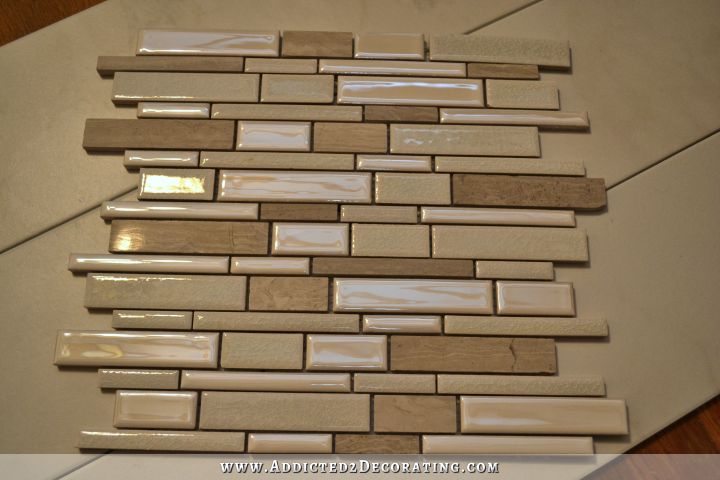 So those are three of the main finishes I’ll be using in the bathroom. 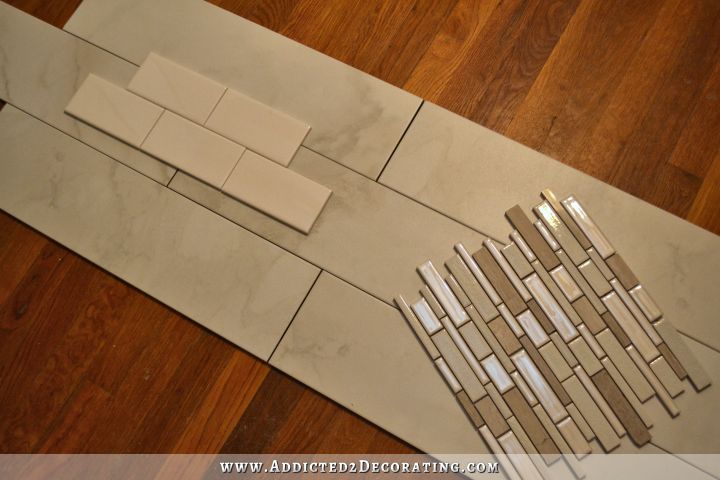 On the walls in the main part of the bathroom (i.e., everything except the tub surround), I’ll be adding wainscoting which I’ll create the exact same way I did the trim on the pony walls. 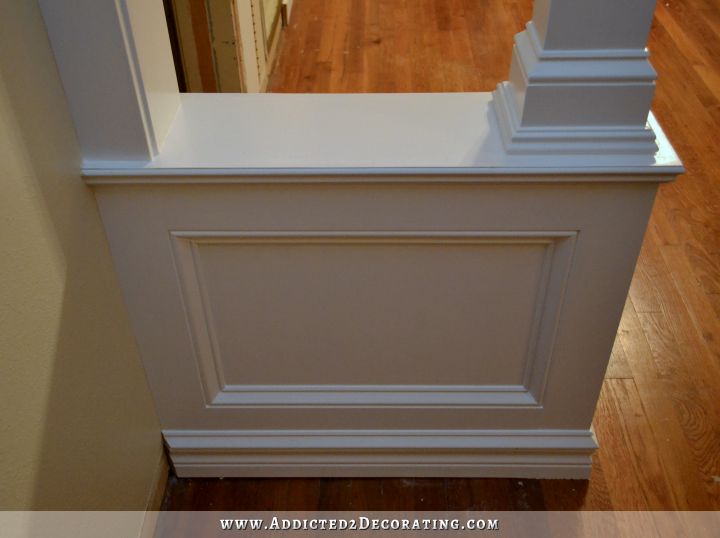 In the area where the linen closet used to be, I’m going to add some closed storage at the bottom, with open shelving at the top, similar to this idea from BH&G.  I couldn’t find this picture on their website, so I snapped this from a magazine.  I love the concept, but I’d prefer much more open shelving (rather than small cubbies) at the top. 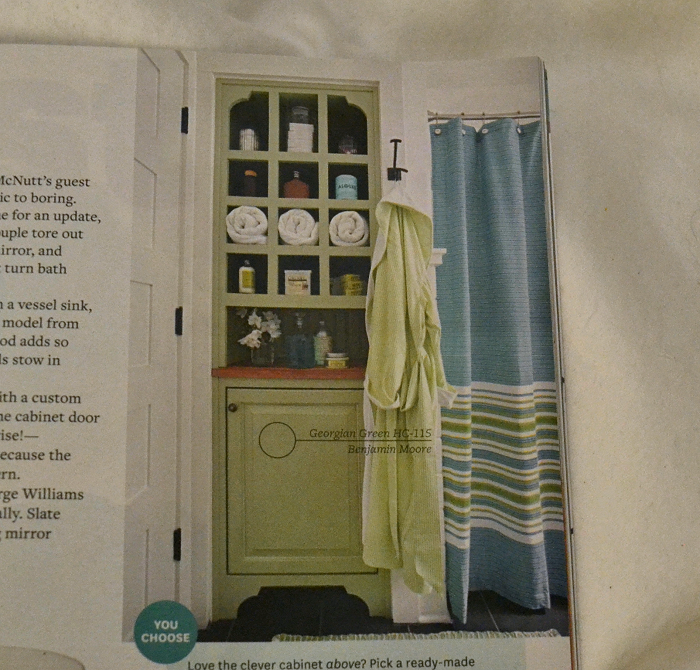 And finally, I selected these sconces to use by the vanity.  They arrived yesterday, but they’re still packed away in the box, so I’ll have to show you the Home Depot picture… 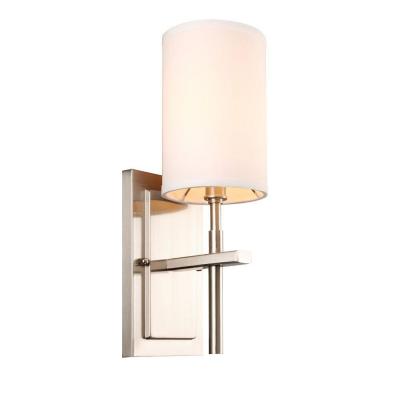 I still have many more decisions to make.  I want to use a non-neutral color on the vanity and linen cabinets/shelves, but I haven’t decided which color yet.  I think I might need to start by selecting a fabric for the shower curtain, and then choose a color from there.  So there may still be some surprises along the way, but I think I’ve got a pretty good start on my plans for this bathroom!

And I have to admit, I’m relieved that I won’t be remodeling this bathroom again in a couple of years.  It’s good to know that once this is finished, it’ll actually be finished.  🙂 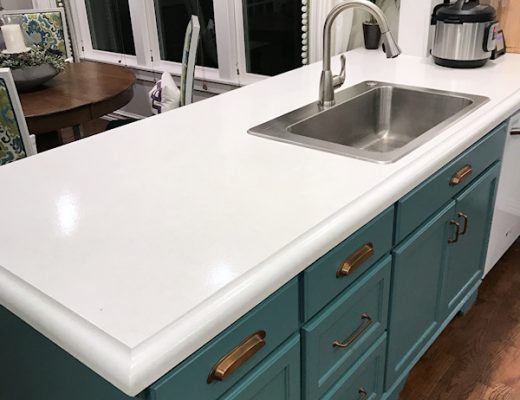 Three Past Projects Revisited — How Have They Held Up Over Time? (Concrete Kitchen Countertops, Wood Bathroom Countertop & Wood Bathtub Skirt) 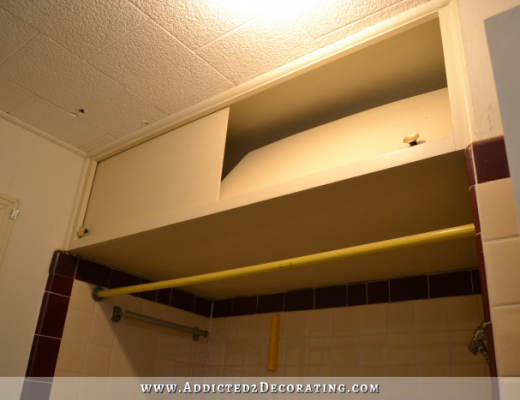 Demolition — The Best Therapy Ever! 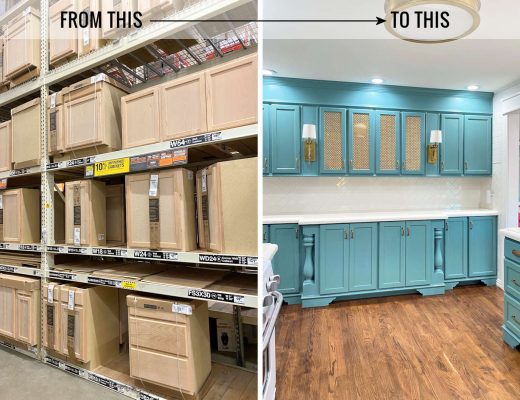