Well, my work pace has slowed considerably over the last two days.  The phrase “as slow as molasses in winter” seems to be appropriate.  Our beautiful 60-degree weather has left us, as has been replaced with temps in the teens, 20’s and 30’s, accompanied by freezing rain and just all around dreariness.  (Temps in the teens, 20’s and 30’s accompanied by the gorgeous Texas sunshine feel MUCH different to me than those same temps accompanied by rain, sleet, and lack of sunshine.)  And of course, we still have no HVAC system. That’s #1 on our list of priorities as soon as we sell the condo.

Fortunately, we’re in Texas, which means that our winters are pretty mild overall, and when we do have cold spells like this, they generally only stick around for a couple of days…a few at the most.  I did try to prepare a bit for this cold spell by putting heavy plastic up between the kitchen and dining room.  That dining room is one of the draftiest rooms in the house, and just sucks out any warm air that the infrared heater puts out into the kitchen.  I also used thick plastic to seal off the gaping hole in the hallway ceiling left from when I removed the closet and the old furnace intake duct a couple of weeks back. 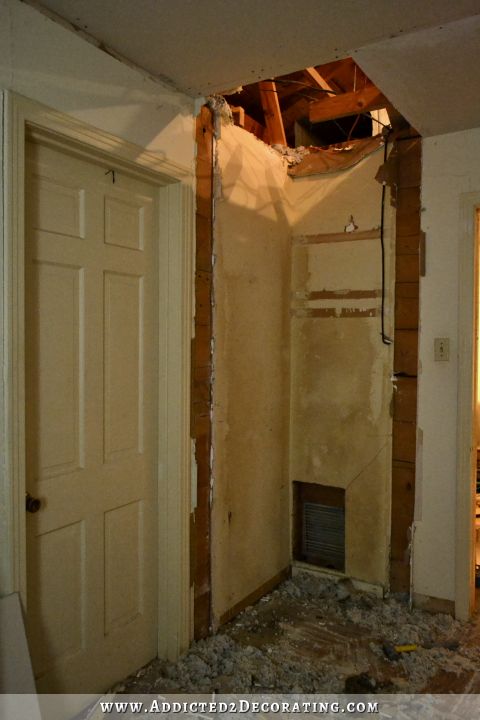 But even with my efforts, our house was so cold on Monday (the coldest it’s been all winter, by far, because of all of the moisture in the air) that all four of us — Matt, me, our dog Boo, and our cat Peeve — stayed hunkered down in Matt’s game room all day, with the door closed and the infrared heater pumping out as much heat as possible.  It was so nice and toasty in there that I didn’t dare venture out into the hallway (or any other part of the house) to do any kind of work in the cold.  It was actually kind of nice to have a valid excuse for taking another day of rest — the second in four days, which is very unusual for me!  🙂  It was actually kind of fun, playing hooky on a work day, watching shows, hanging out.  We even ordered pizza and had it delivered so that I would only have to leave the warmth of Matt’s game room to go to the front door when it was delivered.

Ahhh…the joys of buying and remodeling an old house.  😀  It’ll all get sealed up, insulated, and heated/cooled eventually, and in the interim, we’ll make do any way we need to.   Thank goodness we live in Texas, though!  The weather is already warming up a bit (although as I write this, it’s actually snowing outside), and by this weekend, it’s supposed to get back into the 60s, and will even hit 70 by next Monday.  And at some point in the future, we’ll look back on these days and say, “Do you remember that winter that we didn’t have an HVAC system?”  We’re making memories, for sure!  🙂

There have been a couple of times over the last few days that I’ve kind of regretted removing the ductwork for the old furnace, which still works, and still sits in the back storage room of the garage.  But when I remember the loud, rumbling, exploding sounds it would make at least once a day as the furnace would kick on, which would literally shake the entire house and rattle the windows, I’m actually very glad that the ductwork is gone so that I’m not tempted to turn it on.  That thing did keep us nice and toasty warm last winter, but it also scared the crap out of me.  I’d rather be cold than be scared for our safety in our own home.

Anyway, enough about that!  This is supposed to be a post about my new bathtub surround!  The last time I showed you my progress, it looked like this… 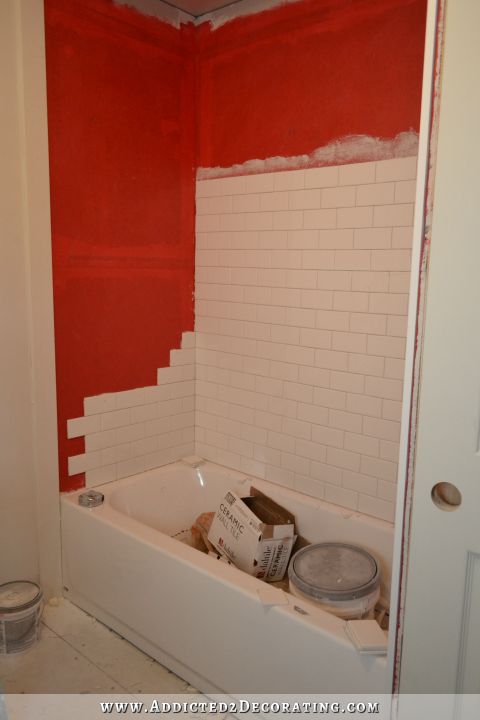 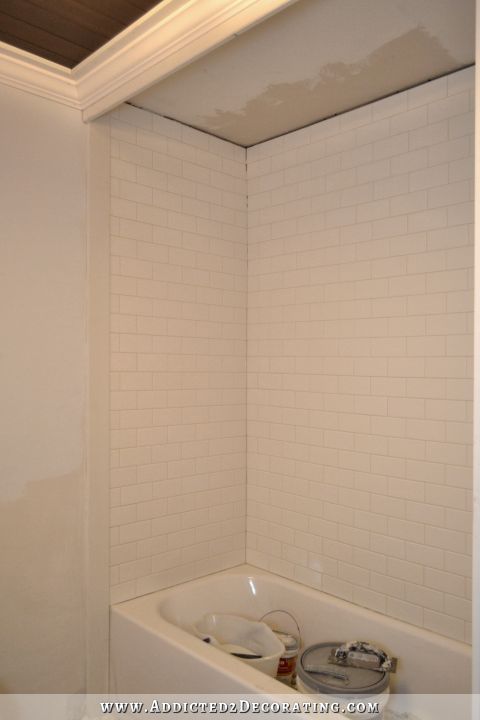 I seriously love white subway tile!  It’s so inexpensive that you can tile huge areas at a very low cost.  But I also love how light, bright, and clean it is.  This room started out so dark and dingy-looking that this light, bright expanse of clean, white tile is such a welcome sight.

The tile would be completely finished now except that I happened to choose the one grout color for which Home Depot does not carry a matching caulk in stock at the store.  For some reason, they have a matching caulk for all of the pre-mixed grout colors except for the one that I chose, which is Alabaster.  So I had to order it online, and it won’t be here until next week.  I sure wish I would have checked that before I chose that grout color!  Had I known that, I would have chosen another color, and it would have been done by now.

Another mistake I made was purchasing this sponge with the blue side. 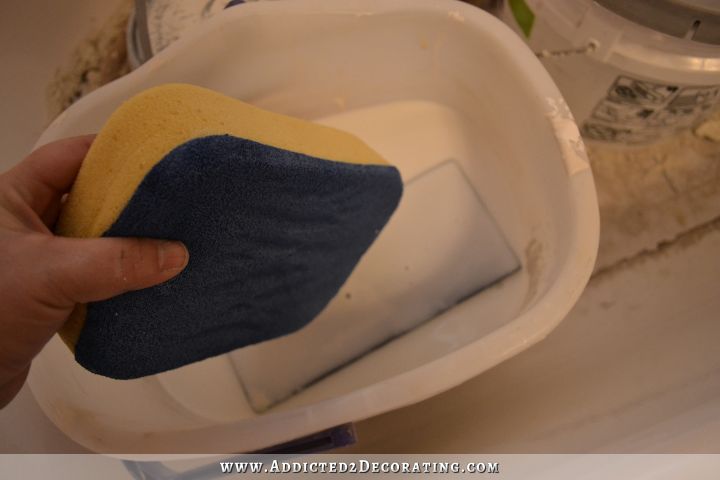 I didn’t do it intentionally.  I thought I was purchasing the solid yellow sponge that is about four dollars cheaper.  I didn’t realize I had picked up this one until I was home and unwrapping it.  When I realized what I had done, and that it was so much more expensive, I thought it would be better than the one I generally use.

Not true at all.  In fact, it was a real pain to use.  That blue cloth-covered side is much thicker and denser than the yellow sponge, so it was impossible to wring out as much water as I’m generally able to wring out of the solid yellow sponges.  This was a problem because I’d swipe the sponge over the tile, and about 20 seconds later, I’d look back at the areas where I had removed the grout, and there was water dripping down from the grout lines, bringing the grout with it.  No matter how much I tried to wring out every bit of excess water, it would still do the same thing just because that blue side makes it so much harder to wring out.

Because of all of the water running down, and the grout following the water, this was absolutely the messiest tile job I’ve ever done.  I finally gave up trying to get it all clean during the process, and just let it dry like that.  I went back yesterday and had to clean up some grout lines with a razor blade, and now I’ve got an unbelievable amount of grout haze to clean up.  And all because I wasn’t paying attention and picked up the wrong (more expensive) sponge. 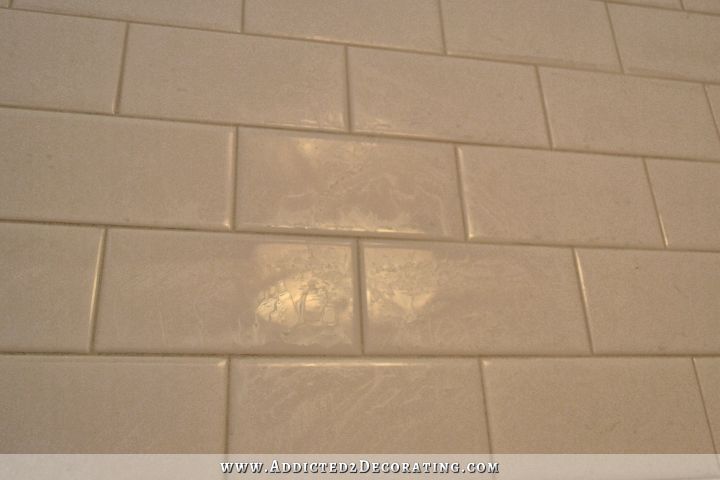 Oh well.  It was definitely a learning experience.  I can guarantee you I’ll pay much more attention from now on when I’m buying sponges for tiling projects!

I also need to decide what I want to do about the gap at the top.  I think it’s too big to caulk, but too small to tile.  So I’ll probably end up just attaching some sort of small trim and calling it good.  I also need to finish up the ceiling, which will just be sanded, primed, and painted. 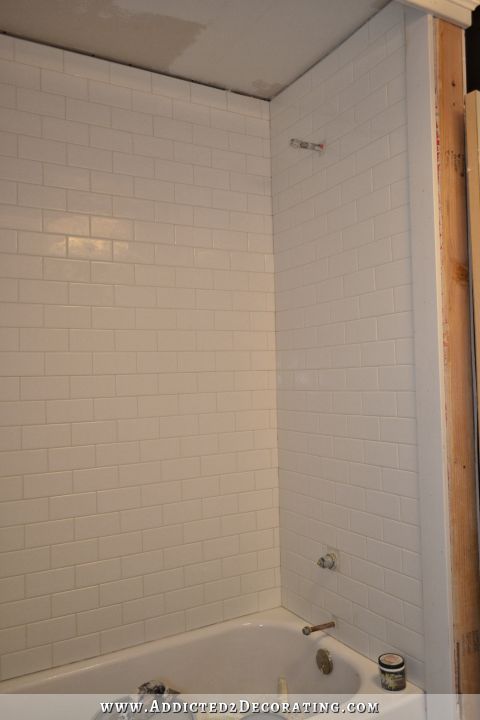 And thanks to some of you brilliant people, I’ve decided that I’ll put the exhaust fan above the tub!  For some reason, I had gotten it in my mind that it was against code to put it directly above a tub or shower.  But after a few of you mentioned it, I decided to research it to verify that it can be done that way, and sure enough!  If you purchase an exhaust fan that’s rated for use above a tub (not all of them are, so you have to verify by looking at the specifications for each fan), and as long as it’s wired to a GFCI circuit, it’s fine!  So that’s the plan.  That way, I won’t have to have an unsightly vent on my pretty new stained wood ceiling.

So here’s a glimpse at the way the tub looked before, and the progress I’ve made. 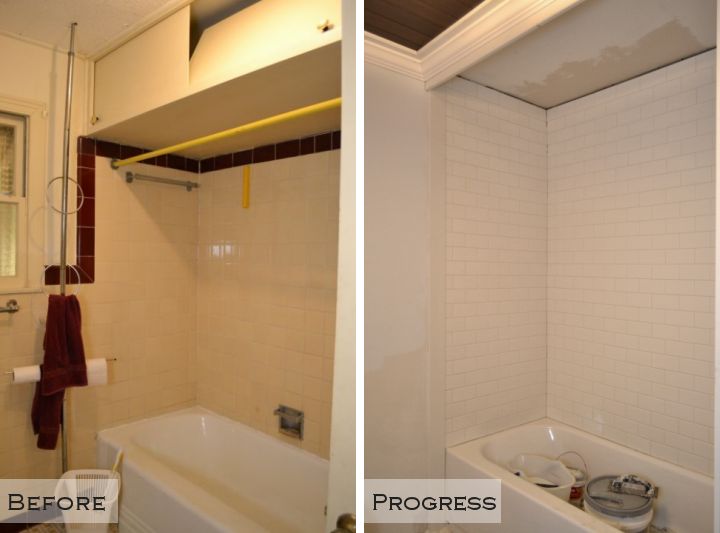 Every time I go in there, I’m amazed at how tall the ceiling looks in there now that I’ve removed that strange storage cabinet above the tub, and now that the tile goes all the way to the ceiling.  And you may have noticed that I created a kind of “valance” using a 1 x 6 board across the top of the tub (that the crown moulding is attached to).  The shower curtain rod will go behind that, so I’ll be hanging a full-length shower curtain as well.  That will also give the illusion of a higher ceiling.  Short, squatty shower curtains are one of my least favorite things ever.  I like my shower curtains to look more like a custom drapery panel than a store-bought shower curtain.

So while progress has been slow these last couple of days, I’m at least making some progress!  Hopefully I can get the floor tiled today, and then I’ll be ready to start on the vanity! 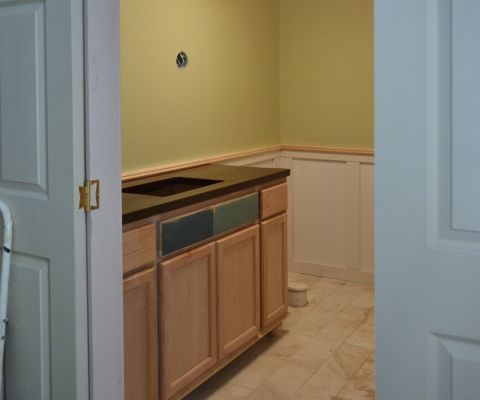 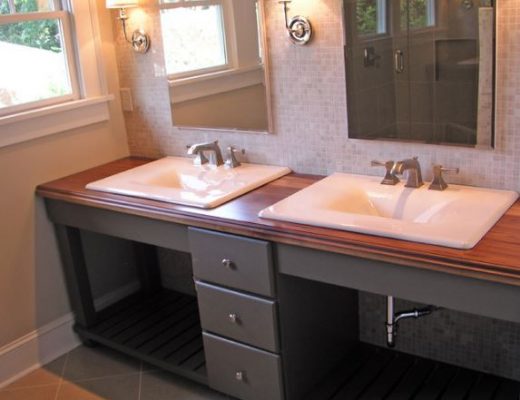