My hallway cabinets were finished. I had built them, trimmed them out, primed them, sanded them, caulked them, painted them, and taken my final “taaaa daaaa” pictures. I had moved on to other projects, like getting my doors painted and planning out the design for the wall.

But those stupid cabinets just kept nagging me. It’s true that the top left door wouldn’t open all the way because of the thermostat… 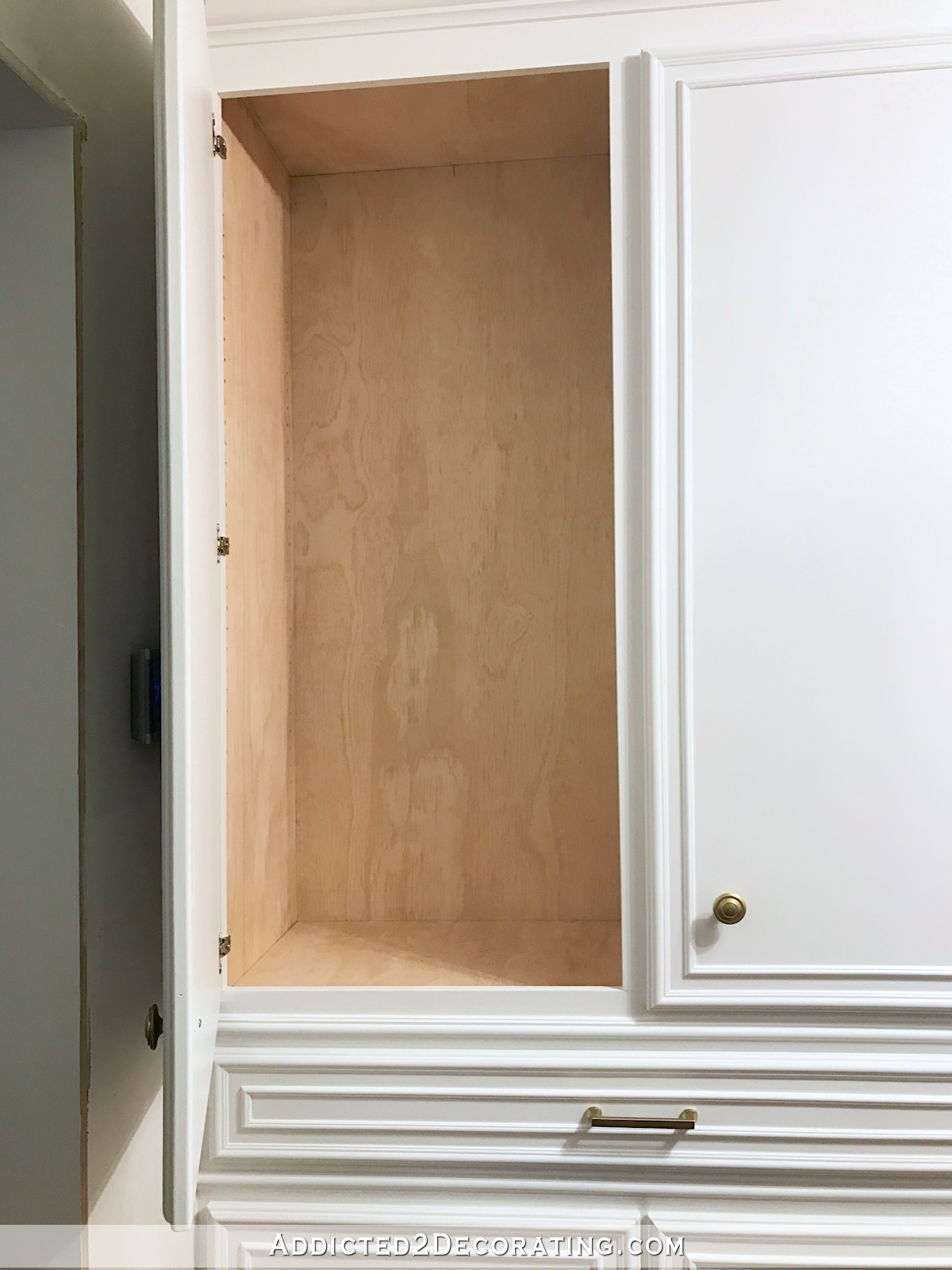 …but I really wasn’t too bothered by that. Sure, it would be nice if it opened 90 degrees, but I really could have lived with it like that.

But then a couple of days ago, it hit me that the trim hasn’t been added yet to the cased opening right there by the cabinet (i.e. the opening between the hallway and the music room). I panicked, grabbed a scrap piece of 1″x 4″ MDF board, which is what I use to trim out my doorways, and hoped and prayed for the best before I tested it.

I tried and tried to come up with a solution, even possibly using this as an excuse to purchase the planer I’ve wanted for so long now. That way I could plane the boards for the door casings so they would be thin enough for the drawer to slide past.

But that’s ridiculous. I’d be spending $500 or so dollars that I don’t really want to spend right now, plus I’d end up with one doorway with casing that’s clearly different from the rest.

Nope, that wouldn’t work. The only solution was to move the entire cabinet over 3/4″ so that the upper cabinet door would open all the way and the drawer would easily open past the door casing.

I was sick about having to take things apart, but I knew it had to be done. In my mind, it wasn’t going to be that big of a deal, though. I knew that once I got the crown moulding and baseboards removed… 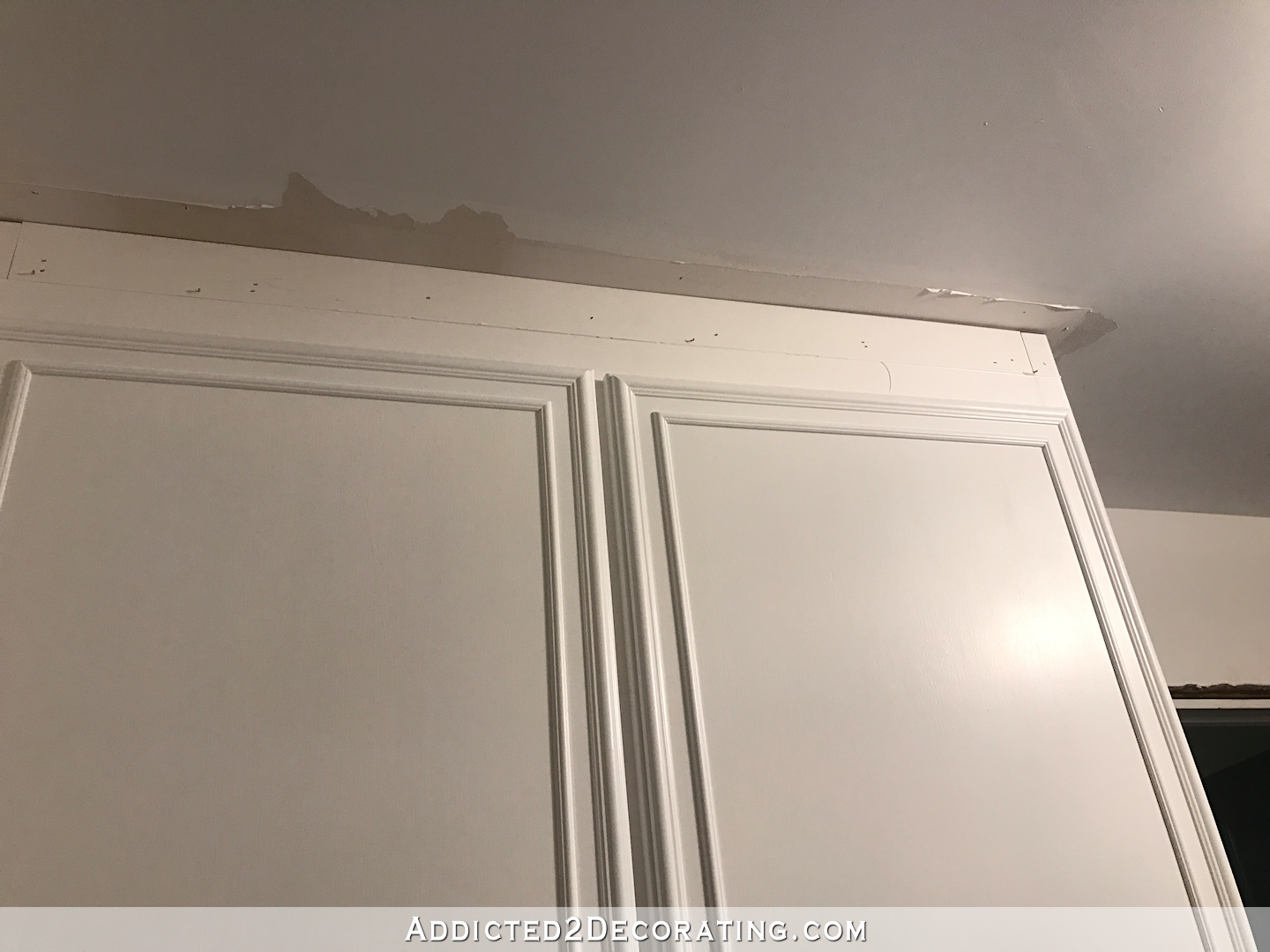 …there were just a few screws holding the cabinets in place.

But then I opened the lower cabinet doors and started searching and searching for the three screws holding the lower section to the wall. I knew they were in there somewhere. Had I covered over them with wood filler and sanded them smooth so that they were hidden? I could have sworn that I put those screws towards the top somewhere, but search as I might, I couldn’t find any sign of them.

That’s when I realized that I hadn’t put the at the top. I had put them at the bottom. As in, the bottom part that is now hidden below the interior plywood base of the cabinet and the 2″ x 6″ frame sitting underneath the plywood base.

I wanted to cry, but there was no time for that. I just pressed on.

First I removed the 1″ x 6″ attached at the bottom, and then I pried the plywood off of the base… 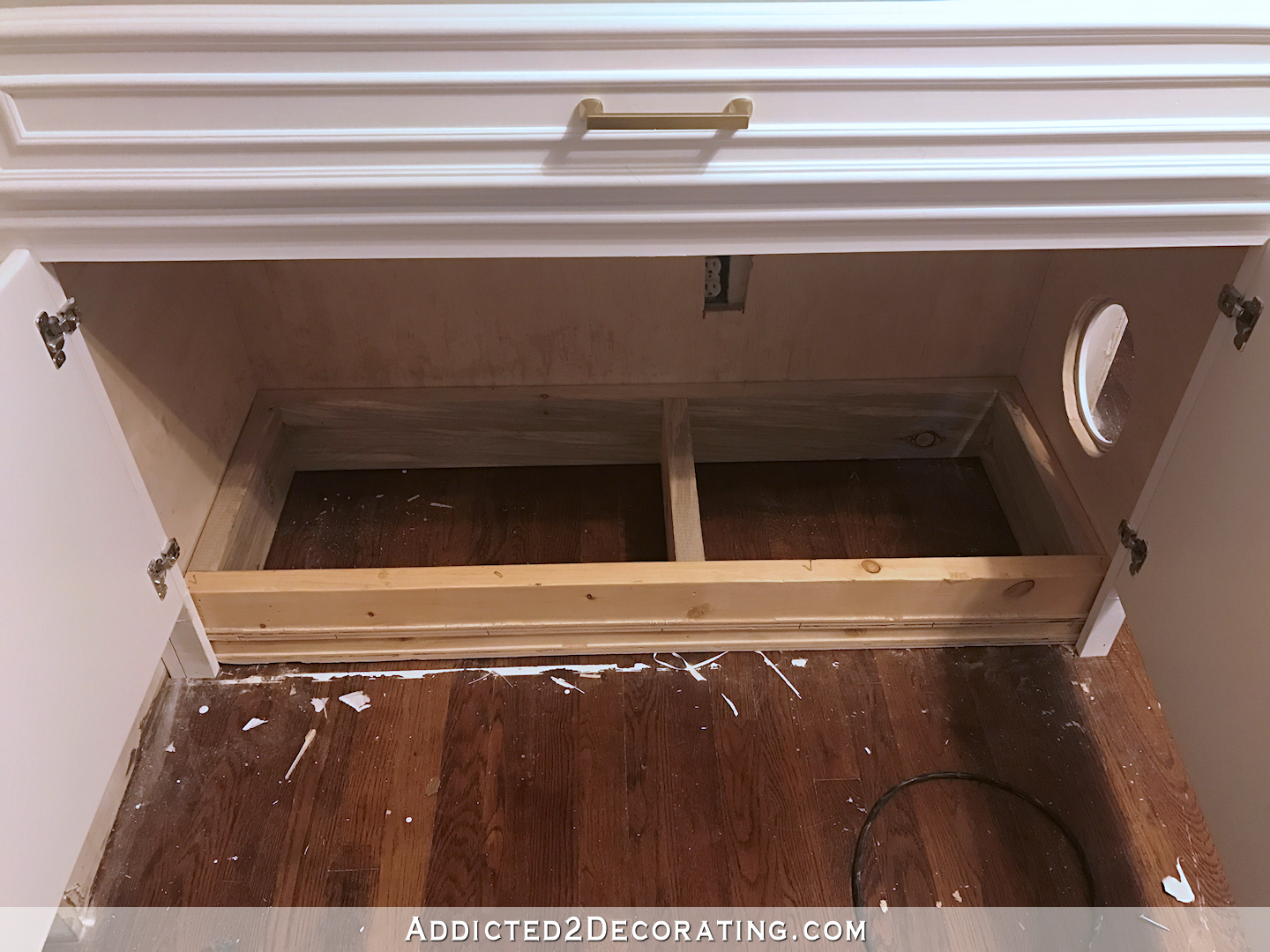 And then I tried to remove that 2″ x 6″ frame, but let’s just say that I didn’t build this thing to come apart. I pried as hard as I could, and it just wouldn’t come out.

Talk about frustrating! After about 20 minutes of prying, and only getting it to budge about 1/4 inch, I finally decided I needed a new tactic. So I used my prybar, and with all my strength, I pried the cabinet away from the wall, pulling the screws right out of the wall. 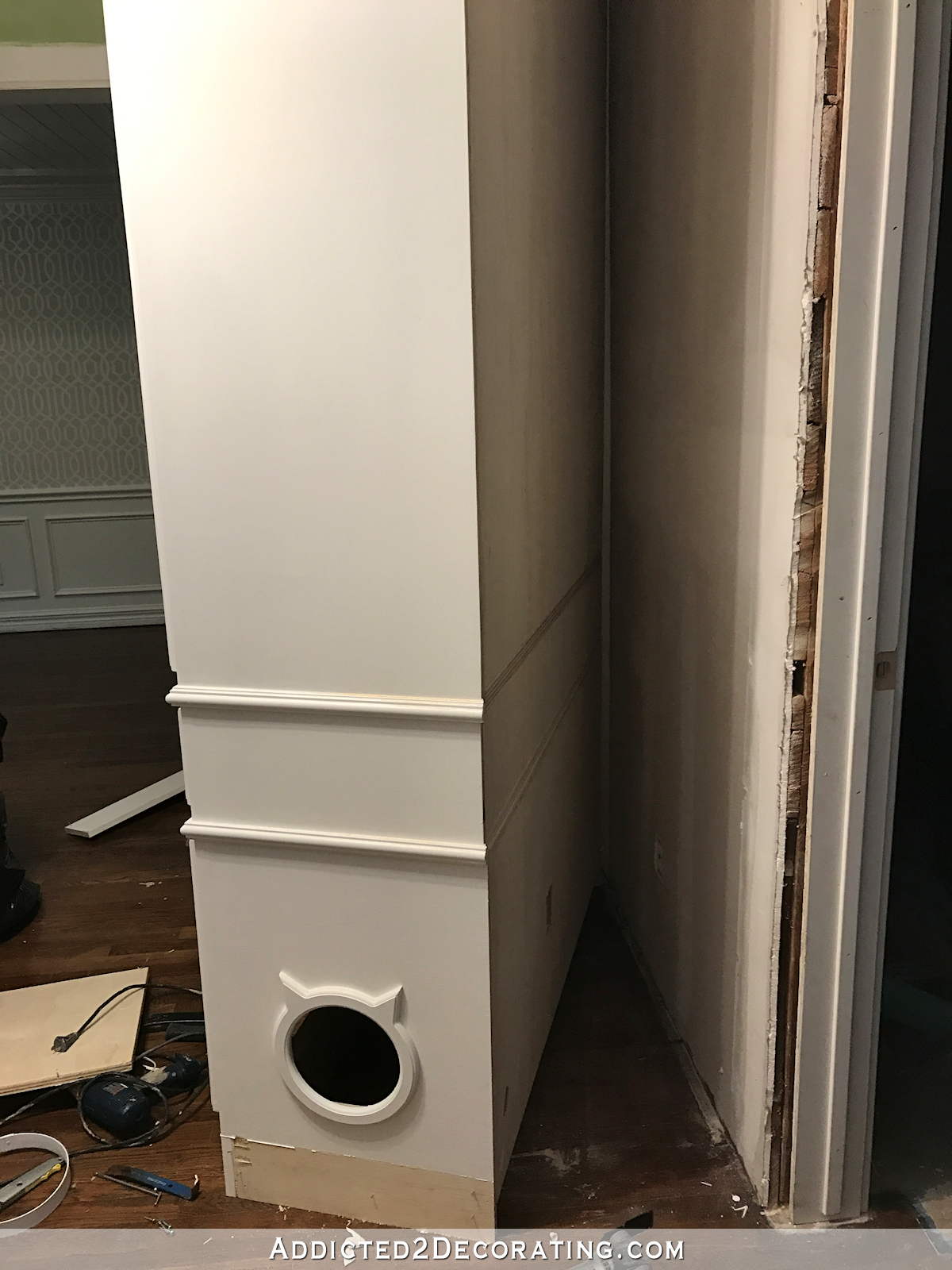 With it away from the wall, I was able to use my Dremel Multi-Max to cut the screws off on the back and side.

*Sigh* I wish I had tried that first and avoided the frustration and unneeded steps of taking the inside apart. 🙁 Oh well.

So with the cabinet free and the screws gone, I could move the whole cabinet over a bit and add the 3/4″ spacer at the wall. 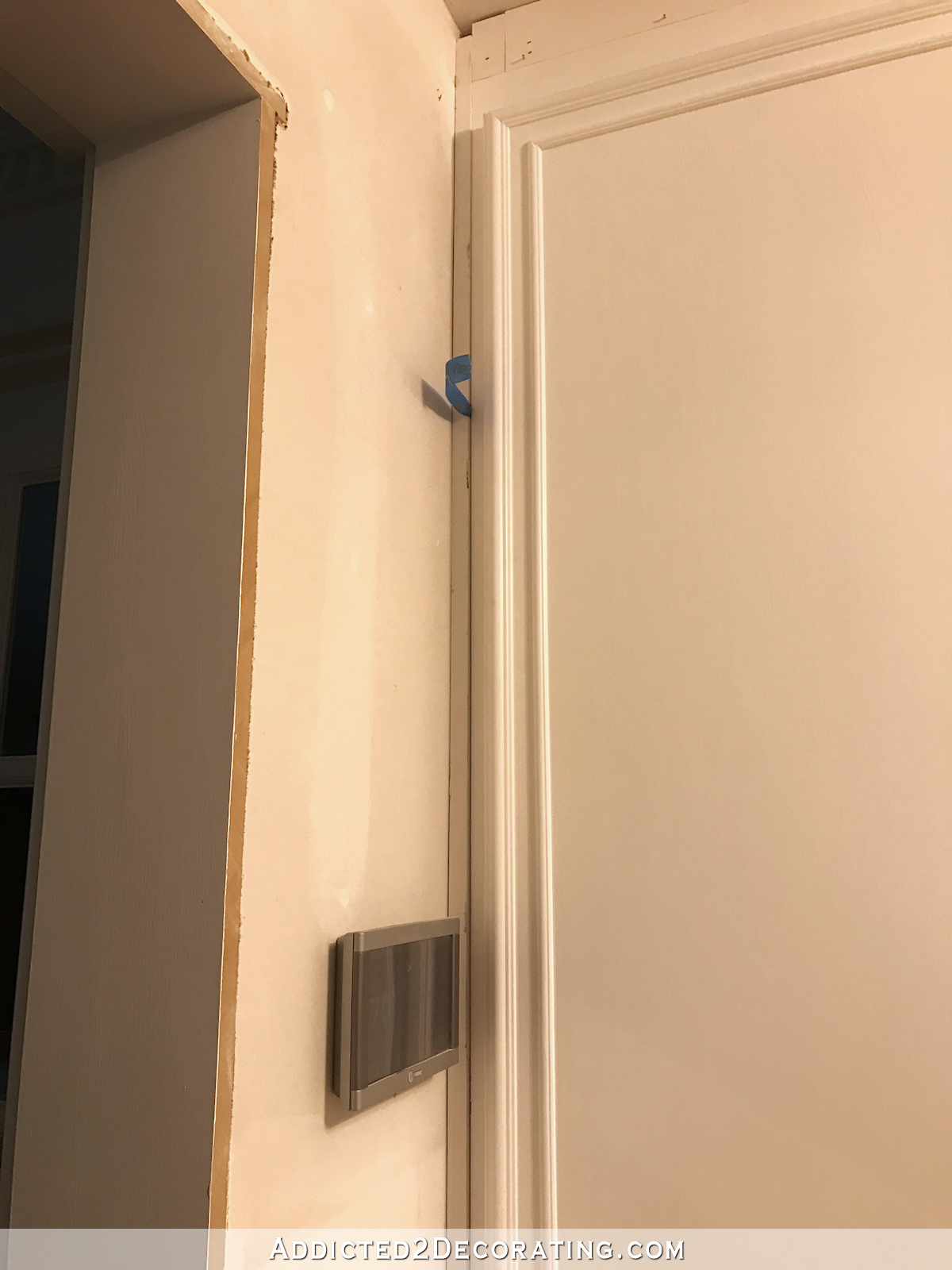 I thought I could put the spacer there, shove the cabinet up against it, use a hammer to tap the spacer perfectly into place, and then nail through the inside of the cabinet, through the spacer, and into the wall to keep it all in place.

That hasn’t worked so far because I’m having a heck of a time getting it in there just right. When the top is just right, the bottom is too far in. When I get the bottom just right, the top is sticking out a quarter inch. So I think I’ll have to pull the cabinet out again, nail the spacer to the side of the cabinet, and then shove the cabinet back against the wall. I know that sounds like the easier plan, and the one I should have tried first, but it isn’t. I’ll have to hold the spacer in place while nailing from the inside of the cabinet through the side and into the spacer. And since I have short arms, I can only do that if I remove the upper cabinet door, which I was hoping to avoid at all costs since those upper doors are so heavy and almost impossible to install by myself. I was really hoping that the last time I installed them would be the very last time.

But I’ll do what it takes to get this thing right. I know in the end it’ll be well worth the effort to have a cabinet door that opens just past 90 degrees, and a drawer that opens completely past the door casing so I can actually utilize the full-extension drawer slides.

And yes, that additional 3/4″ makes all the difference. There will be about 5/8″ clearance between the casing and the edge of the drawer. 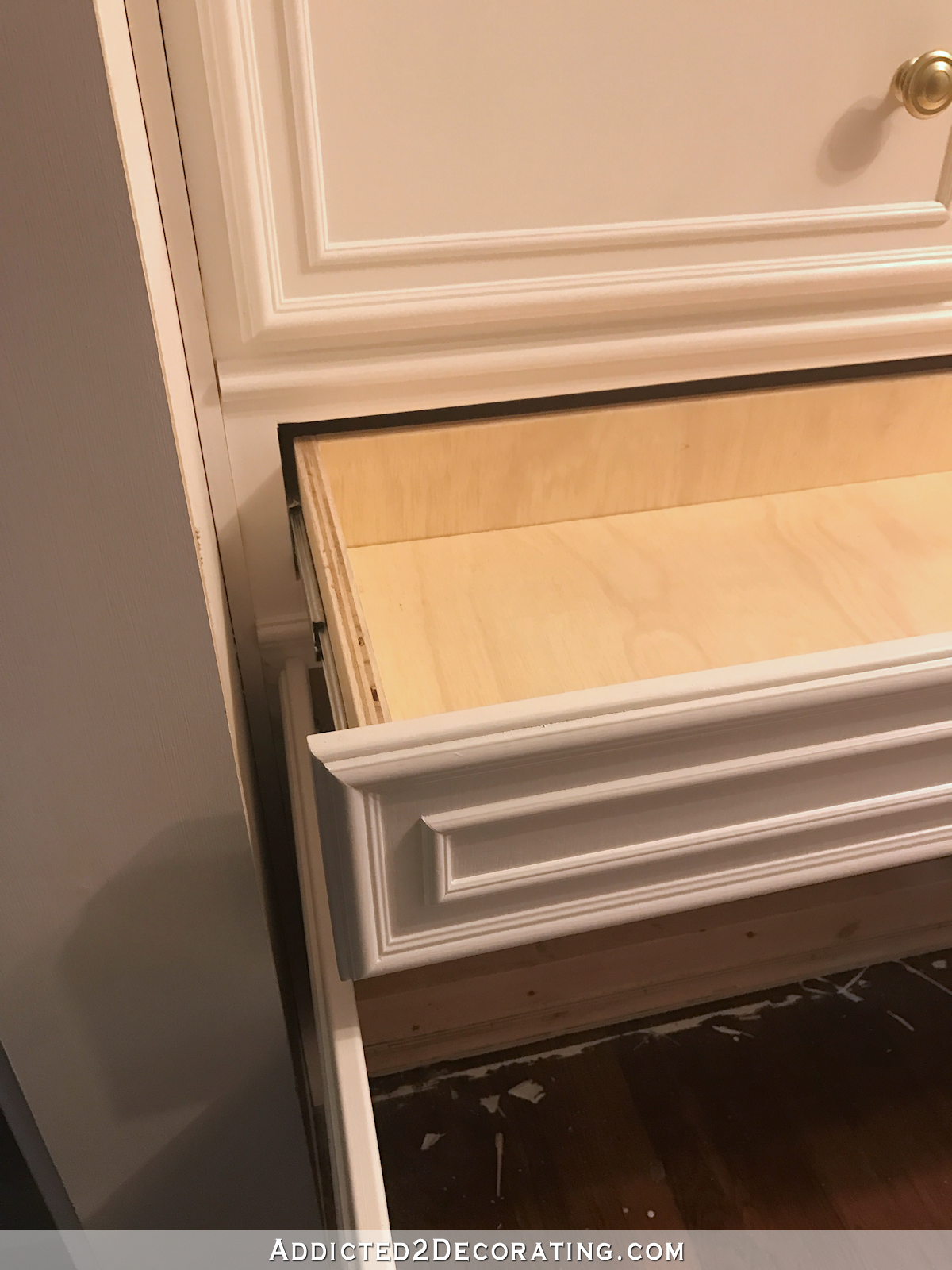 This has been such a pain. And even more frustrating is that I now have to buy all new trim for the front — crown moulding, baseboard, base cap, and the trim between the cabinet and drawer sections — since those are all now 3/4″ too short.

But I just want to get it done and move on. And to be honest, this is the exact reason I wanted to build this cabinet first before tackling the pantry or my studio cabinets. I’d rather make mistakes (and learn from them) on this smaller cabinet than make mistakes like this on the pantry or studio cabinets since those are much larger projects. In hindsight, I’m sure I’ll be thankful for this learning opportunity. But right now, it’s still a bit to early for feeling thankful for my torn apart hallway cabinet. 🙂

Our Remodel Begins! (Plus, Some Serious Sticker Shock) 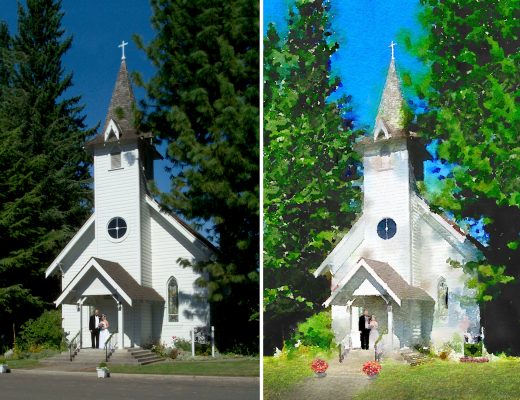 Custom Watercolor Artwork For My Hallway (Without Any Actual Watercolor) 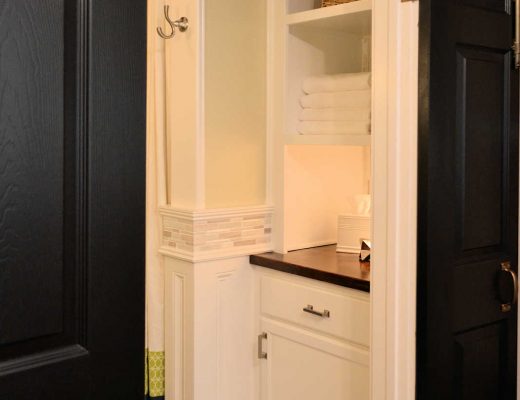