I was beginning to think I’d never see the day when I’d have all of the trim installation, wood filling, sanding, caulking, priming and painting finished on the guest bedroom, but I finally got the second coat of paint on the bedroom door last night, and with that, it was all finished.

I still don’t have to floor painted. That’s a completely separate project altogether, and I’ll begin tackling that today. But for now, I wanted to show y’all the room with all of the trim installed, and all of the walls, trim, and closets painted.

Let’s jump back in time just a bit, though, and remember what this room used to look like. The original room had the window in the middle, just like it does now. But it also had a door to the front porch on the left, and a second window on the right.

I had that doorway closed up way back when we had the new siding put on the exterior of the house, and then when we had the new drywall installed in this room, I had them drywall over the window on the right so that I could create closets around the main window. And we also had that old window replaced. So here’s what the room looked like at that point…

And now, with the new window, new trim, new closets, and new fan and lighting, here’s the progress on the room as of today…

The wall color is Benjamin Moore Classic Gray, and the trim color is Behr Polar Bear. The ceiling is just white ceiling paint from Behr that I used straight out of the can, so I guess that would be Ultra Pure White.

The accent wall is a hand drawn design that I did using acrylic pens. You can find details on that project here…

The wall color, which I also used on the bedroom door, is a color that I had custom mixed, but this is the formula…

I mentioned previously that I might put a clear topcoat on the mural wall, and I did end up doing that. I used my favorite General Finishes High Performance Topcoat in a flat finish. I used my Critter sprayer to spray on two coats of clear coat.

The reason I did this is because those acrylic pens are not like acrylic paint. The pens marks will rub off if you get something on the wall and have to wipe it down with a damp rag. And because I did the wall mural before installing the trim, and I always caulk my trim, and my process of caulking involves the use of a wet rag, I needed to seal that design on the wall before caulking.

Since the room is small, I built the closets so that they have sliding doors on them rather than standard swinging doors. I still need to finish the inside of the closets, but I’m still trying to figure out how I want them configured.

I had originally planned to do a built-in window seat between the closets, but I changed my mind when I realized that a window seat would make getting Matt to safety through that window in case of emergency really difficult. So instead, I’ll put something movable there — a desk or a bench.

And of course, the golden yellow upholstered bed will go against the accent wall.

I wish y’all could see the mural in person. I just love those hints of gold peeking out from behind the white. I think you can see a little of that golden hue in this picture…

As I said above, I used the wall color on the door. The door is a pocket door, so I still need to purchase and install locking pocket door hardware.

And I still need switch plates and outlet covers.

I’ll use standard outlet covers on the light gray walls, but on the mural wall, I’m going to purchase the paintable full-coverage outlet covers so that I can make them blend in seamlessly with the wall mural. If you’ve never seen those, this is what I’m talking about. They’re textured so that they’re paintable, and I’ve never had trouble with paint chipping off of them. And they blend in seamlessly, which is preferable in cases like this instead of having big white rectangles distracting from the wall. I used one on the outlet on the end of the peninsula in my kitchen because I didn’t want a white rectangle on the teal cabinet. It looks great (most people never notice that there’s an outlet there), and I’ve never had trouble with the paint chipping.

Anyway, the other side of the room is much more bland compared to the accent wall…

But when the room is finished, this wall will have a dresser, a TV on the wall (I think this one will be hidden rather than framed like the breakfast room TV), and some artwork.

So now I need to focus on the floor. That’ll be a big job, and I have no idea how long it’ll take. But now that I’ve had experience painting an oak floor (after some trial and error painting the design on the back entry of the studio), I think this one will go much smoother. 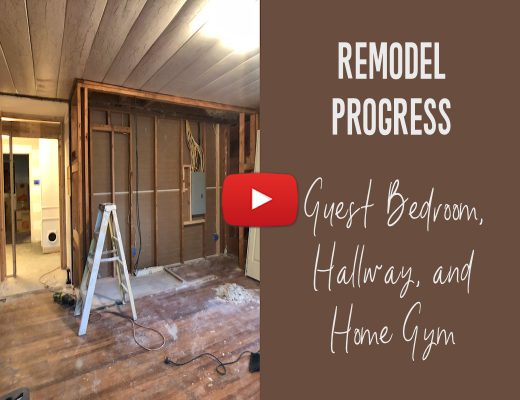 Remodel Progress — A Smaller Hallway, A Squared Up Bathroom, And More! 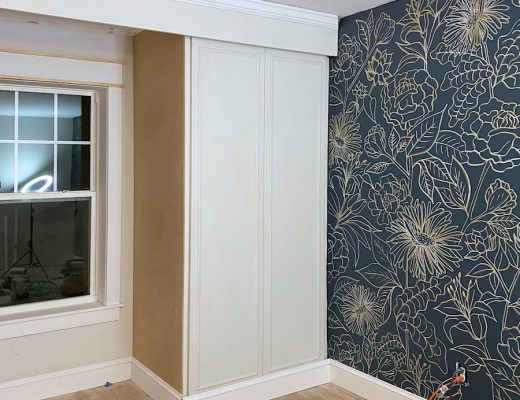