Here’s the story of how I ended up with the absolute perfect frame for my above-the-fireplace artwork.  I mean, it’s exactly what I had envisioned — so much so that I can’t stop staring at it.  I predict that today will be my least productive day ever because I just want to stare at my artwork and frame. 😀

So let me back up.  I picked out one of my mom’s paintings to go over the fireplace, but as you recall, the painting was too small for that space. 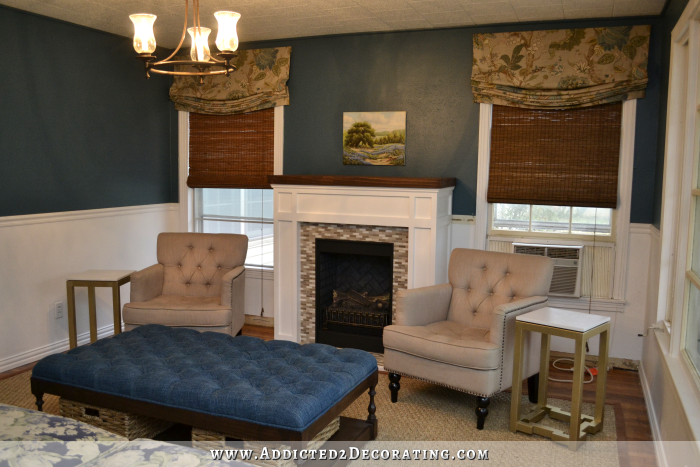 So many of you had some really great and creative ideas for how I could use the original artwork.  But you know how it is when you get a certain vision in your mind of exactly what you want, and you know that nothing else will do?

So I took a picture of my mom’s original artwork, she tweaked the colors in Photoshop to be sure everything was right, and we sent off an order for a print on canvas in a 20 x 24 size.  (The original was a 16 x 20.)

My order arrived last Friday, and I was anxious to get it framed and on my wall.  So my mom and I headed to Hobby Lobby to grab a frame.

Not only did they not have any frames I liked at all (it seriously seems like they’ve carried the same exact frames for the last decade), but they didn’t have even one single frame in the size I needed.  I checked their custom order moulding, and didn’t see anything I liked.

So my mom and I headed over to the place where she’s had all of her stuff custom framed for the past 20+ years.

As the owner pulled some of his ready-made frames from his stash, I glanced over and saw the absolute most beautiful frame ever sitting on an easel and framing an oil painting.  I wish I had taken a picture of it!  It’s like it came right out of my vision for my living room.  It was huge, and a very odd size, but it was gorgeous.

I said, “Something like this is pretty much exactly what I want!  I love this frame!”

So we went back to looking at moulding.  But I couldn’t get that frame out of my mind.

I finally did pick a moulding for my artwork.  The color was a garish brassy gold, but I loved the shape of the moulding and the detail on it.  I knew that I could tone down the color with some antiquing (either with stain or dark wax), so I wasn’t worried about that.  So I placed my order, and he had it ready for me the next day. 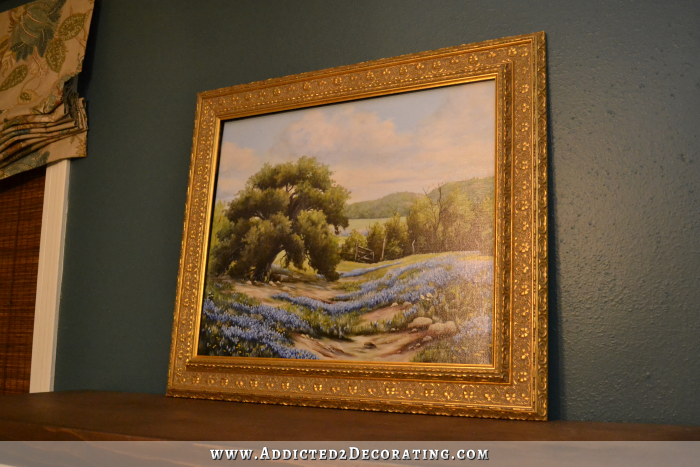 See how bright gold it is?  But again, I wasn’t concerned about the color.  That’s nothing that some dark wax or stain can’t take care of.

I really did like the shape of the moulding, though. 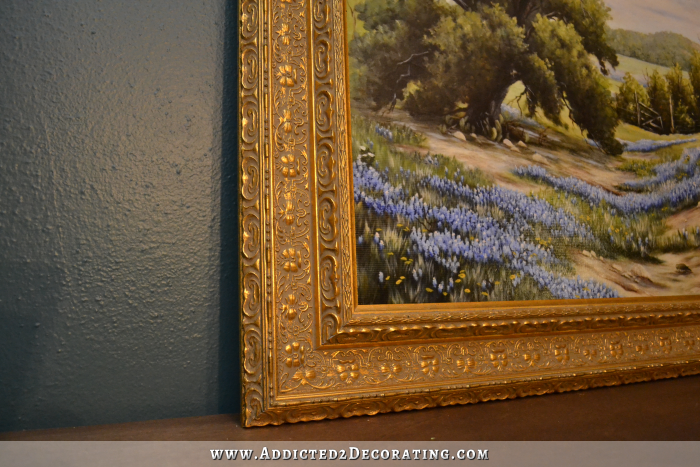 But when I was in the shop to pick up my frame, just as I had paid for my frame (which came to $130 for this custom frame), grabbed my purse, and started heading for the door, a frame caught my eye.  It was sitting on the floor, and it looked so similar to the one-of-a-kind $1200 frame I had fallen in love with the day before.

I casually said, “I guess that’s another one of those really expensive frames, right?”  I kind of laughed and kept walking, expecting him to give me some extravagant price that I could never and would never pay.

He paused and then said, “Do you want it?”

He caught me so off guard that I kind of stumbled over my words.  I said, “Whaa…?  What do you mean want it?  You mean, as in, for free?  As in, I can have it and take it with me right now?”

But he didn’t say that.  He just said, “Well, let me double check, but I’m pretty sure we don’t need that one anymore.  Let me get back with you on that.”

Quite honestly, I never expected anything to come of it, but later in the afternoon, he called me to tell me that I could, in fact, have the frame!  I dropped my paint brush so fast (I was painting the sofa at the time), put my shoes on, and headed out the door in a flash.

The whole way there, I kept trying to remember the size of the frame, and wondering if it would fit my print.  Then I would tell myself not to get my hopes up, and then I would start hoping it was just the right size.  By the time I was pulling into my driveway with my new frame, I had thrown all caution to the wind.  I just knew that it was meant to be, and that my new frame was going to be the perfect fit for my print! 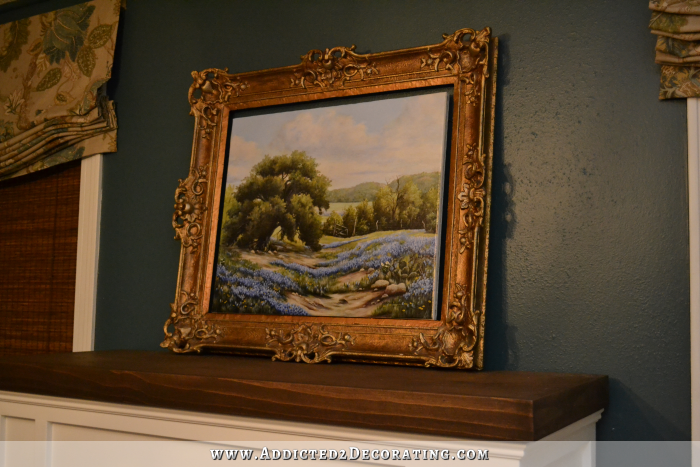 It was about two inches too big in height and width.

But I wasn’t going to let a couple of inches ruin my vision.  I was determined to make it work.  So I headed to Home Depot and grabbed some moulding to fill in the spaces.  I just used my miter saw to cut them to size. 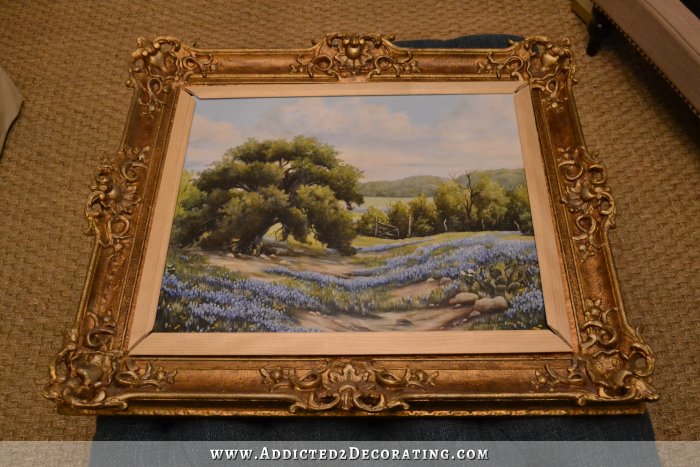 Then I used my hot glue gun to attach the pieces to form a frame. 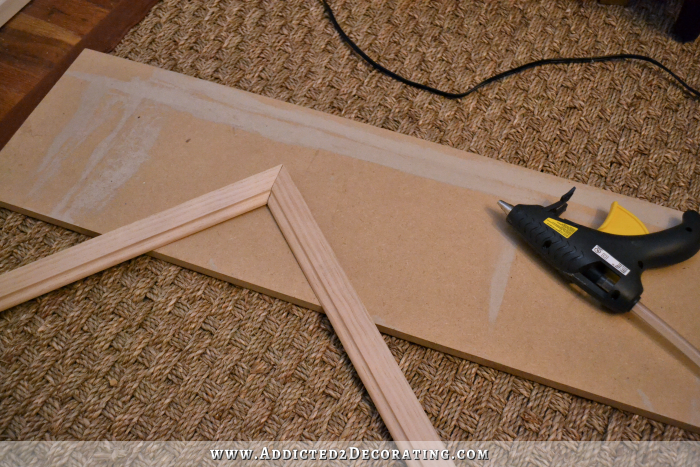 With all four pieces attached, I placed it inside the frame just to double check the size. 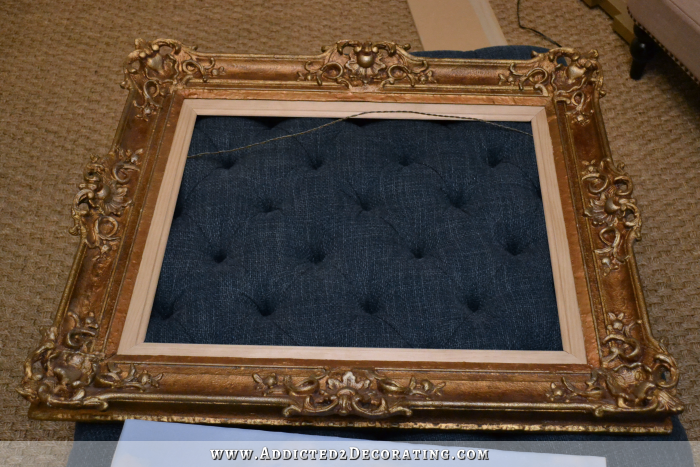 And then I tried it with the print to be sure that it covered all of the edges of the print. 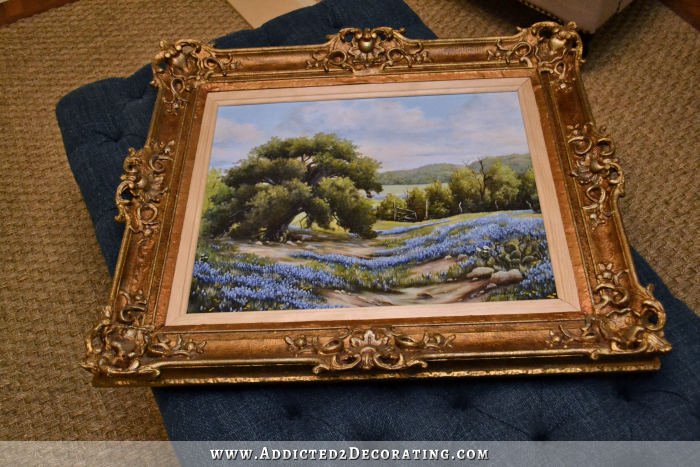 It worked!  Now I just needed some color on it.

I knew that there was absolutely no way I would ever be able to match the color of the frame, so I went a different direction altogether.  He had also given me two other old frames (a matching set) that had a dark stained detail on them. 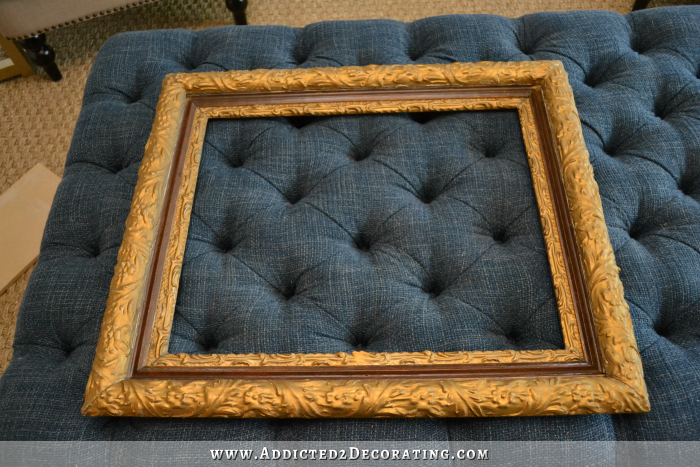 So I decided to do something similar, and stain the new frame liner.  I used Rust-Oleum wood stain in dark walnut. 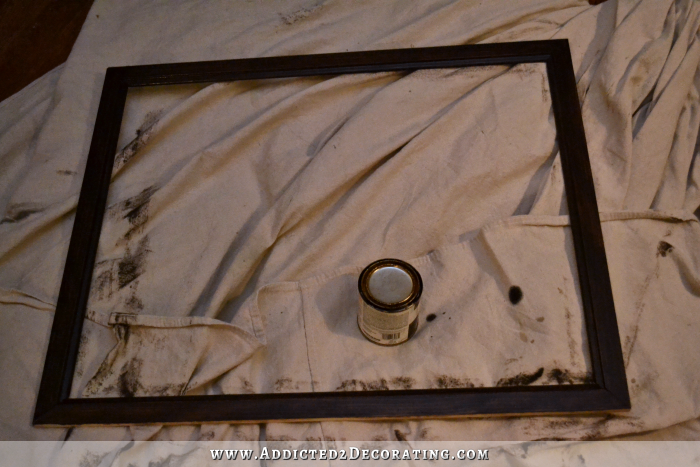 By the way, that’s just one coat of stain on pine trim.  Just want to point out once again that there’s no way in heck that Minwax stain would have covered pine that beautifully.  I don’t get paid anything by Rust-Oleum for recommending their products.  I simply recommend their stain because it’s the absolute best.

When it was dry, I placed it inside the frame, got it centered just right, and used painters tape to hold it into place.  I was very nervous using painters tape on the front of this frame.  I don’t know if it’s actually an antique, but I do know that it’s very old, and some places on it are a bit brittle.  So I was as careful and gentle as possible. 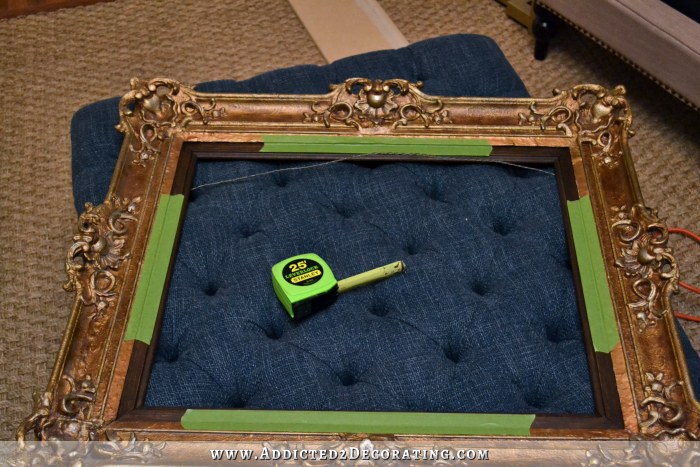 With it in place, I turned the frame over, and used hot glue to attach the liner.  Note that I did not lift up the liner and place the glue under the edge.  I just placed a bead right along where the liner met the frame. 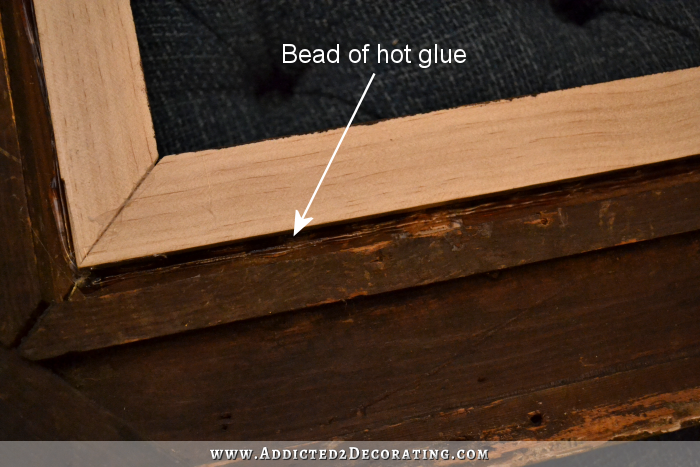 Then I placed the canvas on the liner.  You’ll notice that I didn’t center the canvas.  When my mom used Photoshop to increase the size from a 16 x 20 to a 20 x 24, it actually left some blank space (about an inch-and-a-half) at the top that she had to fill in with clouds using Photoshop.  So that isn’t part of the original painting.  This new frame didn’t require that extra part at the top, so I was actually quite happy to place it in the frame so that the Photoshopped part would be hidden behind the liner. 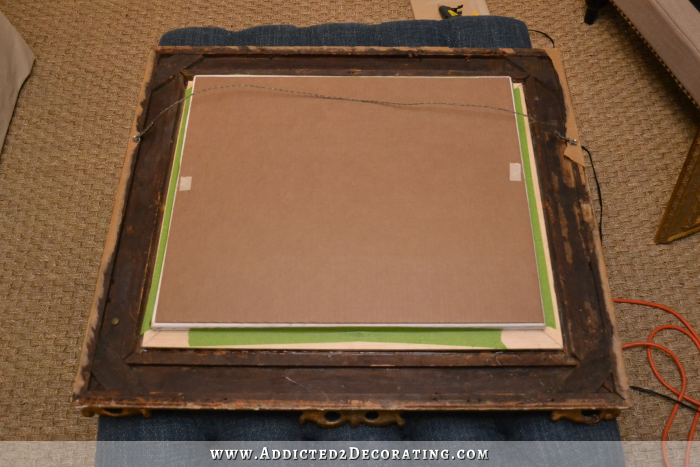 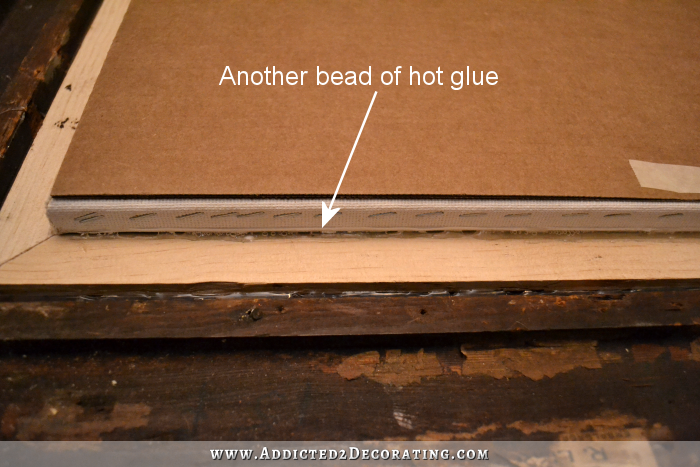 Please note that I never, ever, ever in a million years would have hot glued an original piece of artwork to a frame!!!!

If I were using the original artwork, I definitely would have come up with another method.  But since this is a print, I had no issue with using hot glue.

And with that, it was done!  And here she is in all her glory. 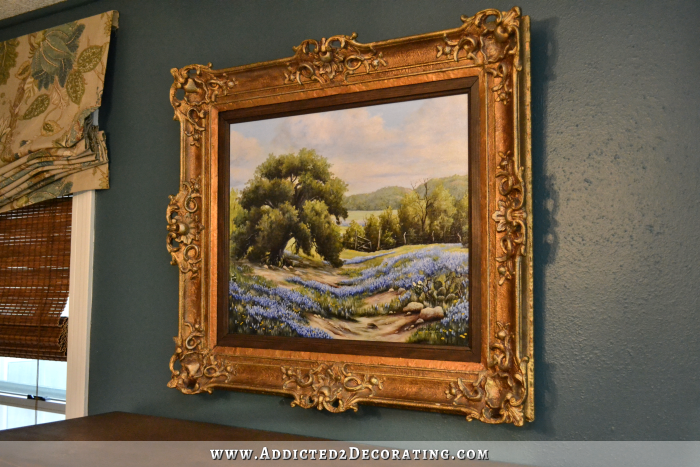 I can’t even explain to you how perfect I think this is.  It’s like my vision for the artwork above my fireplace completely materialized right there in my living room, and the odds of that actually happening I thought were slim to none. 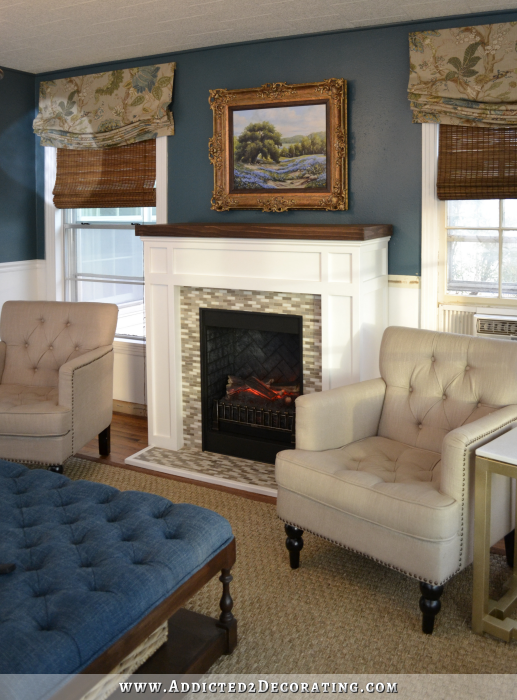 I can’t stop staring.  I think it’s the most beautiful thing in my whole house. 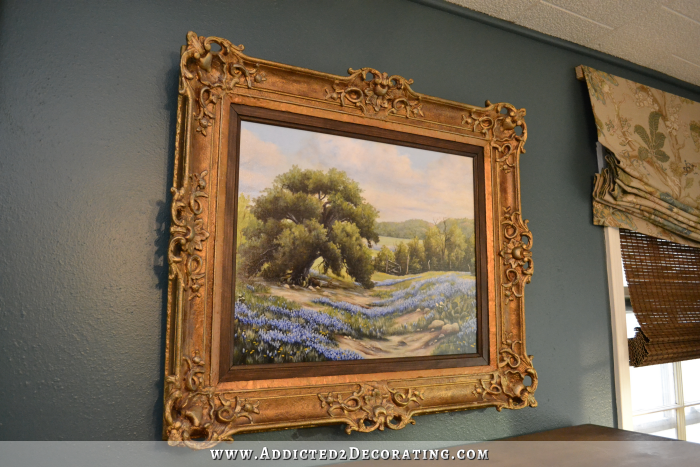 Before this frame fell into my lap, I had ordered some sconces from Shades of Light.  They’re supposed to be here on Friday, so I’m anxious to see if they’ll still work with the new frame.  I sure hope so!  Sconces would complete the vision I had in my mind for this wall.

Well, except that my vision included an overmantel with trim and painted white to match the fireplace, but now I’m second guessing the overmantel.  I love how the frame looks on the rich teal wall.  So we’ll see where I end up with that.

I’m off to stare at my artwork some more!  🙂 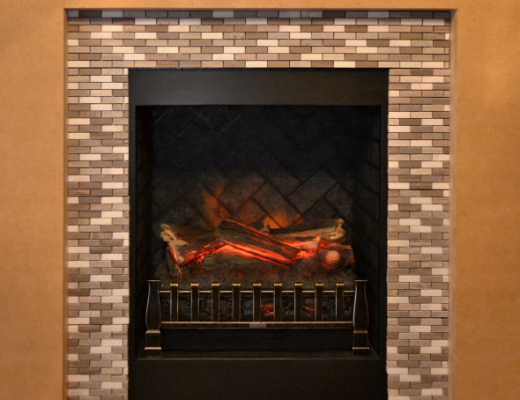 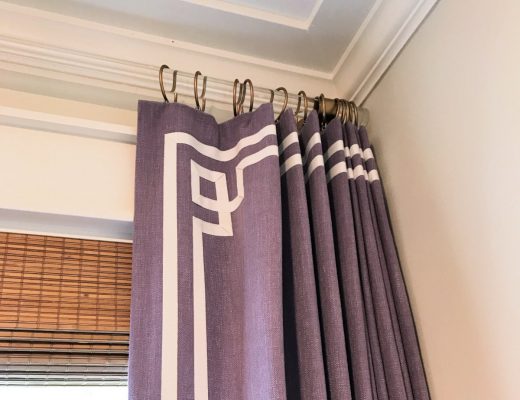 April 9, 2018
Previous Post Do You Know How EASY That Would Be To Make?!
Next Post The Goal: Disguise A Window Unit Air Conditioner