When I decided to paint the walls in my living room and entryway teal, it kind of left some things up in the air about the other items in the room. While I had mentioned painting the console table the same green of the credenza, and then using the herringbone lamps on the green console table, I was no longer sure if a green table would work with the teal.

But after living with the green credenza in the living room along with the teal walls for a couple of days, I decided that I actually love the two colors together, so I decided to go ahead and paint the console table in the same green that I used on the credenza — Jungle Trail by Behr.  I’m so glad I did, because it looks so much better in the darker color! 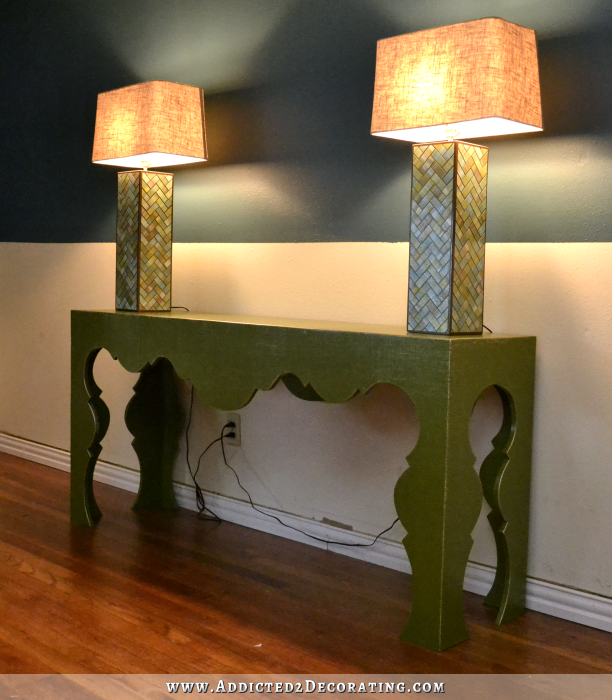 The new color definitely gives more visual weight to the table, which was definitely needed, and I think it’ll look quite stunning when I finally get to finish this wall with the beautiful white wainscoting that I have planned.

**I will be doing something with the lamp cords.  But I’m not going to waste time on that right now since I’ll have to move this table at least once, but probably a couple of times, to finish the wall.  I still have to paint the bottom part white, install the chair rail, and install the baseboards.  Once the wall is finished, I’ll move the table back and wrangle my lamp cords.

I really love the way the lamps look sitting on green.  This green just gives them much more presence than the light turquoise-ish blue did. 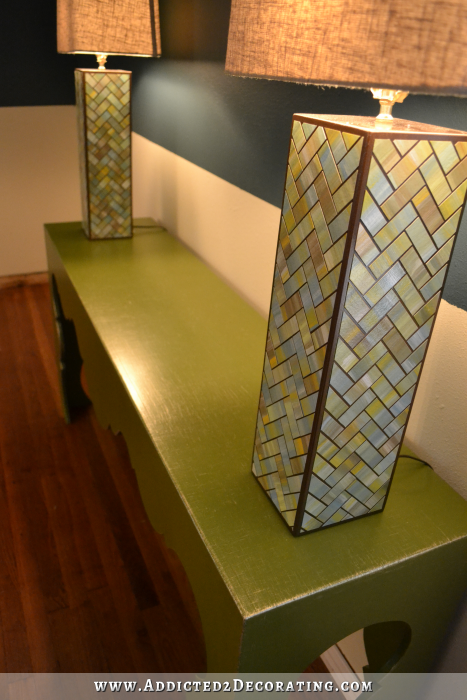 I did the same metallic crosshatch finish on the green as I had done on the blue, but I’m not sure it has quite the same effect on this darker color. 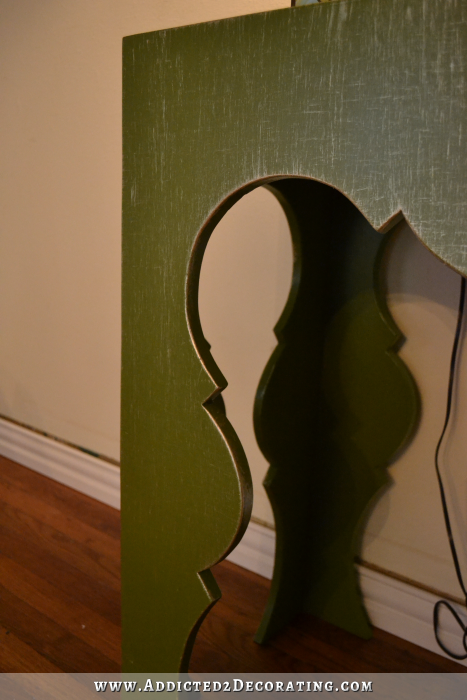 So obviously I decided to use the herringbone lamps on the console table rather than in the living room. 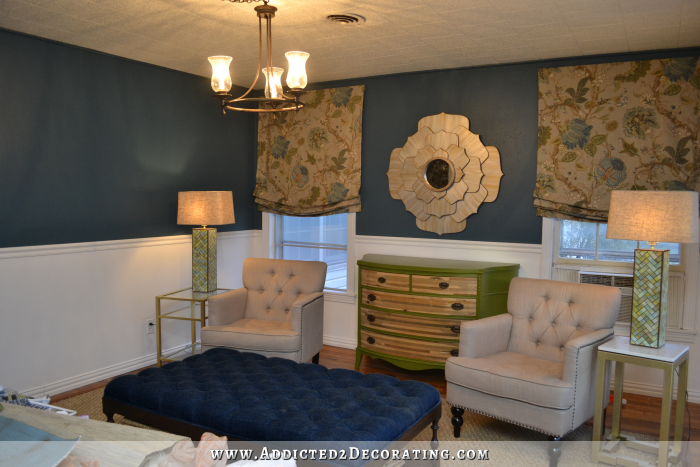 Initially, I really liked them in there, but after living with them in there for a couple of days, I decided that there was just something “off” about them.  They just don’t have that same presence sitting on a glass or white table top.

But I’ve also decided that I’m not going to use my turned “wood” floor lamps over there either.  They’re just too big and command way too much attention.  I’ll probably end up getting something much more understated that doesn’t have a big lampshade that I’ll be tempted to put fabric on.  🙂  I’m thinking something like this floor lamp from Ballard Designs would be perfect. 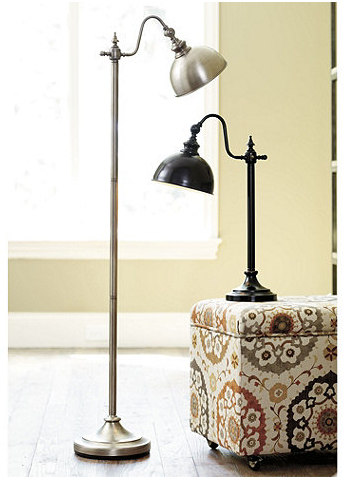 And if I use something more understated like that, I think I’ll be able to also use wall sconces above my fireplace, which I would love!  But more on that later.  🙂

Edit:  Here’s a comparison of the table in blue and the table in green.  Unfortunately, the only picture I had with the lamps sitting on the blue table doesn’t show the whole thing, but it’ll give you an idea of how the color worked (or didn’t 🙂 ) with the lamps. 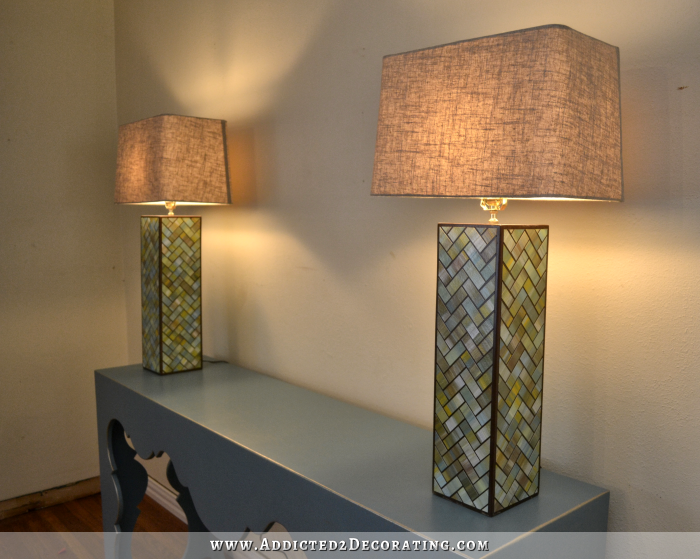 I didn’t dislike the blue, but I think the visual weight of the darker green has much more impact on that wall. 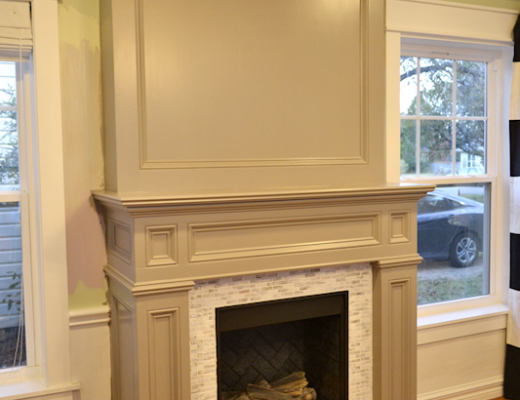 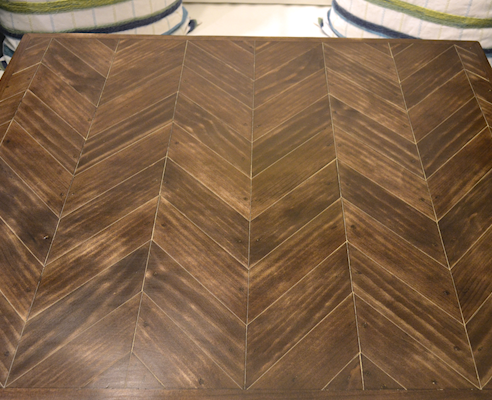 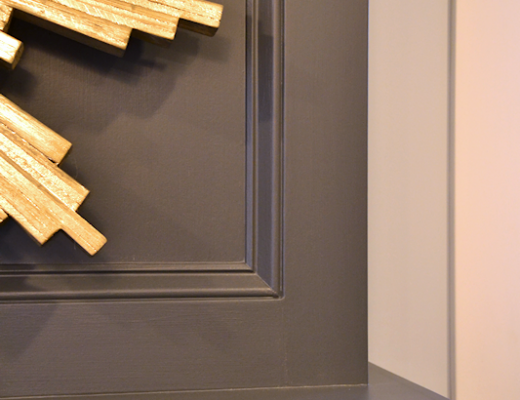 November 30, 2016
Previous Post Demolition -- The Best Therapy Ever!
Next Post A New Media Console For My Mom (Antique Buffet Before & After)